What is "graffiti," anyway?

A US graffiti artist who painted Facebook's offices is set to become a multi-millionaire when the social network begins trading as a public company.
David Choe, who first spray-painted the walls of Facebook HQ in 2005, accepted shares in payment for his work.

Now the site is planning to float on the stock market, its thought his share could be worth around $200m (£126m).

Well, that's a nice windfall, and the best of luck to him.  It caused me to wonder about the origins of graffiti.  It seems a very modern sort of vandalism-decoration.  Did it start with Kilroy was here? 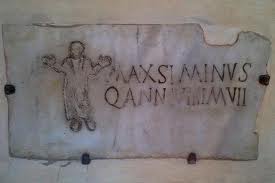 No, indeed.  It is very ancient, or so my encyclopedias tell me.  The word "graffito" or "sgraffito" means "scratched," and is a technique in art where a design is scratched through a layer to expose the undercoat.  Potters used it to create decorative designs.  Other people used it to write rude or flowery sentiments, memorialize their own names, or advertise the charms and addresses of certain courtesans and prostitutes.

The ancient Greeks and Romans went in for it a lot.  Looking for graffiti on the stones of the ancient Egyptian Temple of Dendur, now in the Metropolitan Museum of Art in New York, is an interesting experience, as passing Roman soldiers scratched their own equivalent of "Kilroy was here."  There is also a lot of graffiti in Pompei (example pictured above).

But none of those old taggers expected to make a fortune out of it.  That is a modern development.

Posted by World of the Written Word at 10:32 AM
Email ThisBlogThis!Share to TwitterShare to FacebookShare to Pinterest