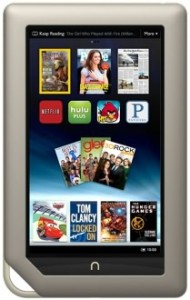 The space should be plenty for reading eBooks and streaming movies on apps. The company has also dropped the price of the Nook Color to $169.

Barnes & Noble also released its earnings report today and revealed that the Nook business — which includes devices, digital content and accessories – increased 38% during Q4 2011 to $542 million from Q4 2010.

eBookNewser has more: “… unit sales for the various Nook devices increased 64% during the third quarter as compared to the same period in 2010. Digital content sales, which includes eBooks, digital magazines and apps, increased 85% on a comparable basis.”
Posted by World of the Written Word at 10:29 AM
Email ThisBlogThis!Share to TwitterShare to FacebookShare to Pinterest