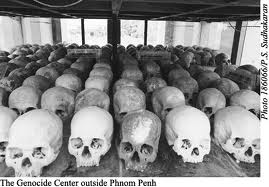 Cambodia's UN-backed war crimes court said Tuesday that media in the kingdom were publishing an apology by a Khmer Rouge jailer imprisoned for life in a bid to provide "reparation" to genocide victims.

Kaing Guek Eav, who oversaw the deaths of some 15,000 people at S-21 prison in the late 1970s, earlier this month had his punishment for war crimes and crimes against humanity increased on appeal.

The court said that statements of apology and acknowledgements of responsibility made by the defendant -- better known as "Duch" -- during his trial were being published in newspapers, websites as well as radio and television stations starting on Tuesday.

Apparently, the apology has given some satisfaction to the few survivors of S-21.
Posted by World of the Written Word at 10:09 AM
Email ThisBlogThis!Share to TwitterShare to FacebookShare to Pinterest