Closure of one Wellington Whitcoulls likely

The mystery of the two Whitcoulls stores might be solved 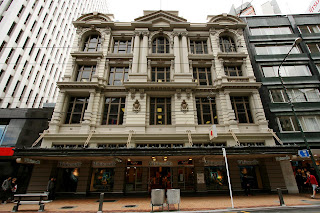 Until quite recently, there was only one Whitcoulls bookstore in downtown Wellington -- the grand heritage building in Lambton Quay, pictured above.
Then the troubled bookstore chain was bought by Anne and David Norman, of Pascoes Jewellery and Farmers Department Store fame.   At the same time, they bought the few Borders stores, including the one that was also in Lambton Quay.  Because this ex-Borders store is just a small frontage away from a Farmers store, I imagined that they would turn the two into one big Farmers.  But no, the signs came down, and signs went up, and the ex-Borders store became a second Whitcoulls, just a hop, step and jump from the original.
So we Wellingtonians have had the strange situation of two stores with the same name and the same stock in the same street.
Now, it appears that the heritage store will be closed down.  The Wellington City Council has declared the wonderful old building to be an earthquake risk, which needs to be strengthened.
No press release has been issued, but according to an item in today's Dominion Post, it is understood that the first, original, wonderful Whitcoulls store will be closed by May 31.
Oh dear, I do hope they don't tear down that lovely old building ....﻿
Posted by World of the Written Word at 9:48 AM
Email ThisBlogThis!Share to TwitterShare to FacebookShare to Pinterest

Oh, I hope so, too, Joan! Fingers crossed that the building will survive, stronger but still lovely.

It would be terrible to see the lovely old building replaced with one of those gaunt glass towers that are so beloved by modern architects. Somehow, I doubt it will be a Whitcoulls, though. It just doesn't make sense to have two big stores so close together. Good to hear from you, Shayne.

I believe you are thinking of John Quilter's bookstore. It hasn't closed -- has shifted to Ghuznee Street. If you look up the website you could get in touch with him and ask.