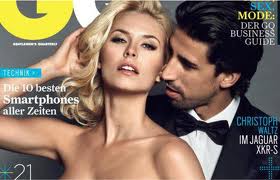 Three Tunisian journalists have been arrested after publishing a photograph of a footballer frolicking with a nude woman, raising fears of a media crackdown by the country's new Islamist rulers.

The Attounissia newspaper printed a photograph on Wednesday of German-Tunisian football player Sami Khedira of Real Madrid dressed in a tuxedo with his hands covering the breasts of his otherwise naked German model girlfriend, Lena Gercke.

The photograph drew an angry response from the country's public prosecutor who ordered the detention of Nasreddine Ben Said, Attounissia's publisher, Habib Guizani, its editor-in- chief, and Hedi Hidhri, the editor of its world section, according to Chokri Nafti, a spokesman for the Justice ministry.

I suspect that for once the rightwingers will have a lot of citizens on their side.  And Tunisia can rest easy in the sure knowledge that Rupert Murdoch is not likely to retire to their shores.
Posted by World of the Written Word at 9:33 AM
Email ThisBlogThis!Share to TwitterShare to FacebookShare to Pinterest