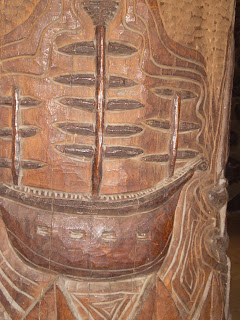 There is an eloquent example of graffiti carved into the centrepost of a thatched, steeple-roofed meeting house in the Tjibaou Cultural Centre in Noumea.  It's a Kanak depiction of HMS Resolution, the ship that was commanded by Captain James Cook when he "discovered" the island on September 5, 1774.  Up until that day, the island's citizens had called their home Balade.  Now, because of the necromancy of European mapmakers, it is known as New Caledonia

A Kanak elder showed us the centrepost, and the carved image of the ship.  Then he said in his careful French, "Captain Cook came with nothing, and took everything away."

Wise words.   The cultural centre (pictured below) that arcs around the ceremonial village was designed by a famous Italian architect with the musical name of Piano. 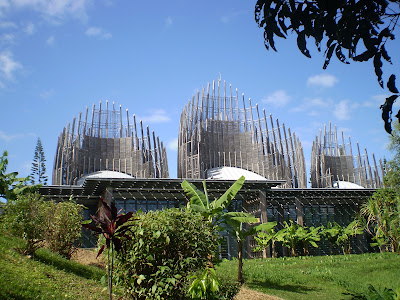 Posted by World of the Written Word at 2:10 PM
Email ThisBlogThis!Share to TwitterShare to FacebookShare to Pinterest