St Valentine -- who was he? 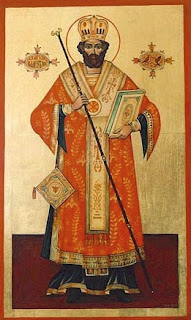 But who was he?

"Valentine" (meaning valorous) was a common name in ancient Roman times, so there are plenty of candidates for the saint.  However, the story of the "Valentinus" who inspired all those cards and flowers seems pretty clear:  He was a priest who married Christian couples, back in Roman catacombs time.

Found out in this nefarious habit, he was brought up before Emperor Claudius (the Second), who really rather liked him.  Indeed, they got along so well that Valentinus made the fatal blunder of trying to convert the emperor.  Irritated, Claudius condemned to a very nasty fate -- to be beaten with clubs and then beheaded.

He first appeared in literature in no less than the Nuremberg Chronicle, printed in 1493. 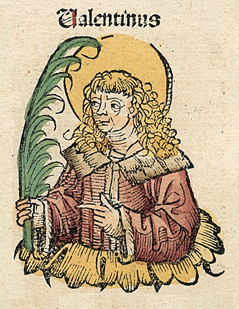 Alongside this woodcut portrait of him, the wording describes Valentinus as a Roman priest martyred during the reign of Claudius the Goth. He was beaten with clubs and stoned; when that didn't do it, he was beheaded outside the Flaminian Gate [circa 269] and buried on the Flaminian Way.
According to legend, while in prison Valentinus fell in love with the blind daughter of his jailer.  He wrote her a letter signed "Your Valentine," and after his brutal death her sight was miraculously restored.
He is the Patron Saint of affianced couples, bee keepers, engaged couples, epilepsy, fainting, greetings, happy marriages, love, lovers, plague, travellers, young people ... and manufacturers of greeting cards. 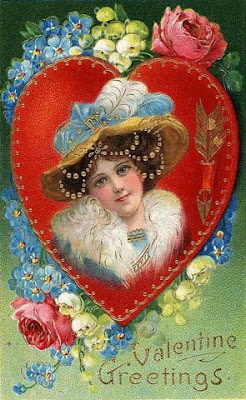 Posted by World of the Written Word at 9:13 AM
Email ThisBlogThis!Share to TwitterShare to FacebookShare to Pinterest