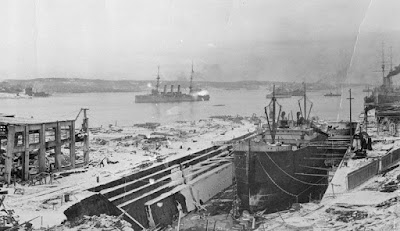 "We turn out of our hammocks at 6.30am and lash up and stow in the usual way,” a Royal Navy sailor named Frank Baker wrote in his diary on December 6, 1917. “We fall in on the upper deck at 7am and disperse to cleaning stations, busying ourselves scrubbing decks etc. until 8am when we ‘cease fire’ for breakfast.” Baker was pulling wartime duty as a ship inspector in the harbor of Halifax, Nova Scotia, on the lookout for spies, contraband and saboteurs.

But there were no ships to be inspected that day, so after breakfast he and his crewmates aboard HMCS Acadia went back to their cleaning stations. “We...had just drawn soap and powder and the necessary utensils for cleaning paint work,” he wrote, “when the most awful explosion I ever heard or want to hear again occurred.”

What Frank Baker heard was the biggest explosion of the pre-atomic age, a catastrophe of almost biblical proportions. The 918 words he wrote for December 6 make up the only eyewitness account known to be written on the day of what is now called the Halifax Explosion. After World War I, his diary sat unread for decades. Now, it has been included in an exhibit on the explosion’s centennial at the Dartmouth Heritage Museum, across the harbor from Halifax. It is published here for the first time.

“The first thud shook the ship from stem to stern and the second one seemed to spin us all around, landing some [crew members] under the gun carriage and others flying in all directions all over the deck,” Baker wrote. Sailors 150 miles out to sea heard the blast. On land, people felt the jolt 300 miles away. The shock wave demolished almost everything within a half-mile. “Our first impression was that we were being attacked by submarines, and we all rushed for the upper deck, where we saw a veritable mountain of smoke of a yellowish hue and huge pieces of iron were flying all around us.”

Unseen by Baker, two ships had collided in the Narrows, a strait linking a wide basin with the harbor proper, which opens into the Atlantic to the southeast. An outbound Belgian relief ship, the Imo, had strayed off course. An inbound French freighter, the Mont-Blanc, couldn’t get out of its way.

The Imo speared the Mont-Blanc at an angle near its bow. The freighter carried 2,925 tons of high explosives, including 246 tons of benzol, a highly flammable motor fuel, in drums lashed to its deck. Some of the drums toppled and ruptured. Spilled benzol caught fire. The Mont-Blanc’s crew, unable to contain the flames, abandoned ship.

The ghost vessel burned and drifted for about 15 minutes, coming to rest against a pier along the Halifax shore. Thousands of people on their way to work, already working at harborside jobs, or at home in Halifax and Dartmouth, stopped in their tracks to watch.

Then the Mont-Blanc blew.

“A shower of shrapnel passed over the Forecastle, shattering the glass in the engine room and chart room to smithereens, which came crashing down into the alleyways,” Baker wrote. “...The fires all burst out on to the floor of the stokehold [the engine room’s coal storage] and it was a marvel that the stokers were not burned to death, but all of them escaped injury as did all the other of the ship’s company.

“A tug was alongside us at the time and part of her side was torn completely out and three of the crew were injured, one of them getting a piece of flesh weighing nearly 2 pounds torn off his leg. A hail of shrapnel descended about 20 yards from the ship, this came with such force that had it struck us we should certainly have all been lost.”

The Mont-Blanc had disintegrated, showering iron fragments and black tar across Halifax; the shaft of its anchor, weighing 1,140 pounds, spiked into the earth more than two miles away. The explosion tore a hole in the harbor bottom, unleashing a tidal wave that tossed ships as if they were bathtub toys and washed away a Mi’kmaq fishing settlement that had been at the northwestern end of the basin for centuries. A volcanic plume of gray smoke, sparkling fragments and flame rose miles into the sky before billowing outward.

“This was the last of the explosion, the whole of which had taken place inside of five minutes,...” Baker wrote. “Then came a lull of a few minutes and when the smoke had cleared sufficiently, we saw clearly what had happened....One ship had been hurled wholesale for a distance of about 400 yards, dashing it close to the shore, a total wreck with dead bodies battered and smashed lying all around in disorder.

“Fires broke out on ships all around and hundreds of small crafts had been blown to hell and the sea presented an awful scene of debris and wreckage. Our doctor attended to the wounded men on the tug as quickly as possible and we laid them on stretchers in a motor boat and took them to hospital. The scene ashore was even worse.

“The N.W. part of Halifax was in total ruins and fires were springing up all over the city. Part of the railway was completely demolished and everywhere were dead and dying among the ruins. When we arrived at the hospital, the windows were all blown out and the wards were two feet deep in water owing to all the pipes having burst. We had to return to our ship as quickly as possible, as we are Guard Ship and responsible for the safety of the other vessels in harbour.”

Back on the Acadia, Baker beheld a desolate scene: “What a few hours before had been beautiful vessels, were now terrible wrecks, their crews all dead and bodies, arms, etc. were floating around in the water.” That afternoon the Acadia’s crew was called upon to quell a mutiny aboard the Eole, a French ship running relief for the Belgians. After doing so, they returned to their ship. “We quickly got hurried tea and proceeded ashore,” Baker wrote. “Here the scene was absolutely indescribable…

Posted by World of the Written Word at 9:13 AM No comments:
Email ThisBlogThis!Share to TwitterShare to FacebookShare to Pinterest

Review of THE MONEY SHIP in Quarterdeck 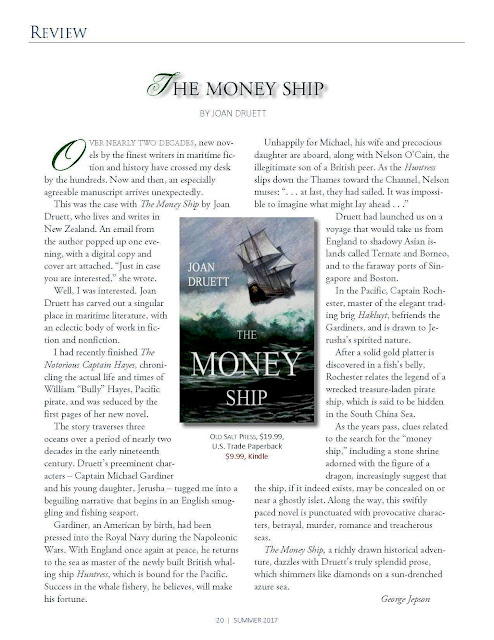 Posted by World of the Written Word at 8:05 AM 2 comments:
Email ThisBlogThis!Share to TwitterShare to FacebookShare to Pinterest 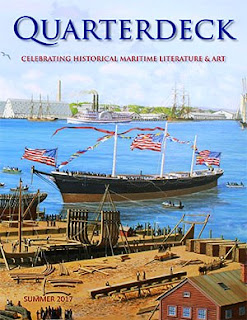 Open free newsletter here
Posted by World of the Written Word at 7:55 AM No comments:
Email ThisBlogThis!Share to TwitterShare to FacebookShare to Pinterest

What would you do to make your favorite author finish a book? 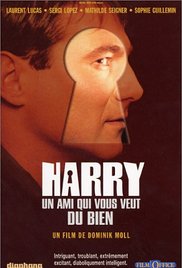 It's a hot, hot, sweaty day on the French version of the autobahn.  There are three grizzling, whining kids in the back, and your wife is doing her best, but getting desperate.

And you are on the way to your holiday house.  Sounds good?  No, it's a wreck of a stone cottage in the countryside, and you are going to spend the whole of your vacation trying to bring it up to scratch.

Including filling a dangerous well where your kids might fall down and die.

Your name is Michel.

You take the chance of a petrol stop to call into the bathroom and rinse your face with cold water.  And when you look up, there is this very respectable, buttondown type guy looking at you.  He smiles.  He looks too long and he smiles too long, and he moves too close.

He's a school friend.  Michel can't remember him in the slightest, but he brings up all kinds of memories -- the girl they both scored with, the poem in the class magazine (which he quotes without a quaver), and the novel Michel never finished.

He's Harry.  And he wants to help.

Somehow, Harry and his girlfriend (Plum) end up at the wreck of a vacation house for dinner.  So, he,with Michel and his lovely wife, Claire, and their three whining children, finds that Michel's parents have left them a present.

Can you imagine anything more ghastly in an old stone cottage?  Michel can't.  And neither can Harry.

Then Michel's car breaks down.  So Harry (who has endless funds) buys him a new SUV.  With air conditioning.  Perhaps significantly, it is red.

And so it goes.  Ever and ever downward, as the suspense builds up.

The ending is a shocker.  And yet satisfying.  The producers have marketed it as a Hitchcock- type thriller, but it is much, much more than that.

Watch it.   The film is called, HARRY, HE WANTS TO HELP, and you can get it with English subtitles.

You will not be sorry.
Posted by World of the Written Word at 6:41 PM No comments:
Email ThisBlogThis!Share to TwitterShare to FacebookShare to Pinterest

The Little Boat that could -- how it came about

My post on the Little Boat That Could has garnered huge interest.  To my delight, Victor Lee Graham Fox got in touch on facebook, to thank me for the post, and to reveal fascinating background to the Little Boat adventure.

"Thanks for posting this!," he wrote.  "I work at Mid-Coast School of Technology in Rockland Maine that has a Marine Technology program for high school students that makes the hull, deck and skeg keel for these intrepid little sailboats sailing across the ocean! Once our students are finished their parts they are passed onto a boat builder like Lyman-Morse to be assembled and made ready for sea working with a sponsorship school or organization that does the tracking and promotion and education with "Educational Passages" of Belfast, Maine. The Kennebunk students for their project "The little boat that could" worked with The Landing School of Boat Building and Design to assemble and make ready for sea this amazing little boat that could! I've attached my link to pictures at MCST of the green molds and one white hull ready to be shipped to a happy sponsor.....Cheers!"

And then I followed the link to EDUCATIONAL PASSAGES that he provided.

There are tips on how to build your Little Boat: 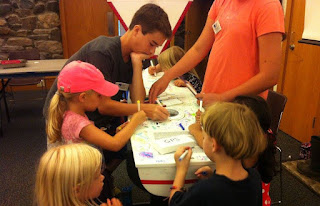 And even an interactive map showing where all the Little Boats have gone.

Posted by World of the Written Word at 3:54 PM No comments:
Email ThisBlogThis!Share to TwitterShare to FacebookShare to Pinterest
Newer Posts Older Posts Home
Subscribe to: Posts (Atom)