Mary Brewster, wife of Captain William Brewster, sailed on the whaleship Tiger of Stonington, Connecticut.
“The best part of the day I have spent in making doses for the sick and dressing sore hands and feet,” she wrote in July 1846;  “5 sick and I am sent to for all the medicin,” but failed to note what the medicines were.

Another formidable female was Caroline Mayhew, the daughter of a Martha's Vineyard doctor, who was on board the Powhattan in April 1846 when the ship limped into St. Jago, Cape Verde Islands, with eight men down with smallpox.  The port doctor refused to come on board, putting the ship into strict quarantine instead, but Caroline managed to cure them, though she never described her methods.
Less lucky in a similar situation was Lucy Ann Crapo, wife of the captain of the whaling bark Linda Stewart, which in June 1880 dropped anchor at Talcahuano, Chile, with four sick seamen.  This port doctor did consent to come on board to look at the men, and diagnosed smallpox.  As it turned out, they had a harmless rash—but it killed them all the same, because he sent them to the smallpox ward, where they contracted the disease from the men who were already there.  “The want of knowing one [kind of rash] from the other has made a sad chapter in our voyage,” wrote Lucy Ann.
Inevitably, there were wives who attended deathbeds.  One was Sarah Gray of Liberty Hill, Connecticut, whose sea-going career spanned twenty years, culminating in a voyage on the whaleship James Maury.  The log for March 24, 1865, reads, "Light winds and pleasant weather.  At two PM our Captain expired after the illness of two days at 5 PM."  They were in tropical waters near Guam, and Captain Sluman L. Gray had died of dysentery, after just three days of illness.
Refusing to allow him to be slid into the sea like an ordinary man, Sarah insisted on pickling the corpse, and so the log for the following day reads, "Light winds from the Eastward and pleasant weather, made a cask and put the Capt. in with spirits."  It was a cask that became quite famous.  On June 28th, the James Maury was captured by the Confederate raider Shenandoah.  The Civil War had been resolved eleven weeks earlier, but Captain Waddell, the commander of the raider, refused to believe it, seizing ships and burning them as usual.  Accordingly, when the James Maury was captured, Sarah Gray hysterically expected the worst.  However, Captain Waddell had heard about the cask and the corpse, and had decided to ransom the 'Maury as a gentlemanly gesture.
Accordingly, 222 prisoners were put on board of the 395-ton ship, and the James Maury was sent off to Honolulu, the cask undisturbed.  With such extreme overcrowding, it must have been a nightmare journey, but somehow, eventually, Sarah got the cask home (the bill for cartage from New Bedford was $11) and buried her husband where he lies today, in the Liberty Hill graveyard.  Local legend has it that he was buried cask and all, but it seems much more likely that the preserved corpse was taken out of the barrel and put into a regular coffin first.

Unfortunate, too, was Annie Ricketson of Fall River, Massachusetts, who sailed on the Pedro Varela.  In 1885 her husband, Daniel, became very ill with some kind of blood poisoning, Annie recording that “one of his testicles come to a sore and bursted and running badly,” and she was terribly afraid for his life.  The schooner beat head winds to get to Barbados, and Captain Ricketson was carried on shore on a litter, to be treated by two shore doctors.   They gave him ether and cleaned out the abscess in his groin—and drove Captain Ricketson insane.  At that, the two surgeons reverted to more traditional methods, putting a blister plaster on the back of his neck.  “I never felt so bad in my life as I did when I cut that hair off,” Annie wrote, and that page of her journal is still stained with her tears.
After two months of watching this kind of blundering, Annie took her husband back on board, and nursed him until he could walk and talk again.  Then they picked up a boat off Annabon, West Africa, in which three sick men had been set adrift.  Daniel fell ill again, and Annie headed for the Azores—where the schooner was put under quarantine, the port surgeon refusing to come on board.  So Annie put to sea again.  Two days later, her husband died.

Posted by World of the Written Word at 9:41 AM 2 comments:
Email ThisBlogThis!Share to TwitterShare to FacebookShare to Pinterest

Whaling captains and their medicating wives 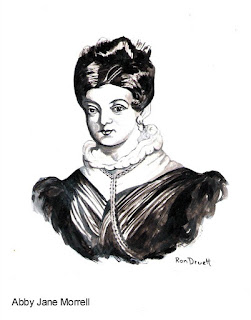 Told much less often than the tales of medical derring-do are stories of captains who killed their men with a lethal combination of ignorance and officiousness.
One such was Captain William Cleveland of the Salem, Massachusetts, ship Zephyr.  While at anchor off an island in the notoriously unhealthy Straits of Timor, in 1829, Captain Cleveland overheard a hand named Cornelius Thomson complain that he had felt a little chilly in the night.  On being cross-examined about it, Thomson protested that he felt perfectly well.  Cleveland, however, was determined "to be on the safe & cautious side"—as his wife Lucy put it—and commenced upon a ferocious course of treatment, which started with "a powerful dose of Calomel of Julep," progressed through a "dose of castor oil" and several enema injections to raising blisters "upon the calf of both legs after soaking them well in hot water," and culminated with "a blister on the breast, throat rubbed with linnament &c."  Within hours the poor fellow was delirious, and by morning he was dead.  It was the day after his twenty-first birthday.
Captain Benjamin Morrell of Stonington, Connecticut, had a somewhat bizarre reason for allowing himself to watch his sailors die—that his wife, Abby Jane, was one of the complement on board his schooner Antarctic.  In October 1829 she, along with eleven of the men, fell ill of what he called “the intermittent fever.”  It was, in fact, cholera—not that it made any difference to the outcome.  “Had she not been on board,” he wrote, “I should certainly have borne up to the first port under our lee … But I reflected that some slanderous tongues might attribute such a deviation … solely to the fact of my wife’s being on board. That idea I could not tamely endure … ‘No! perish all first!’ I muttered with bitterness, as I gloomily paced the deck at midnight.”  Morrell medicated the patients with “blisters, friction, and bathing with hot vinegar,” rather than put into port and risk “the unfeeling sarcasms of … carpet-knights.”  Two men died, but the rest recovered, and Morrell’s reputation was safe.
Other American shipmasters found their wives useful, roping them in to help with medical emergencies—to hold a patient’s head while the master of the ship got going with knife and saw, for instance, and also for nursing duties, sickbed work being part of the traditional female realm.  One such was Mary Stickney, wife of Captain Almon Stickney, who sailed on the whaleship Cicero of New Bedford in the years 1880 and 1881, and kept an interesting record of the men she treated.  Sores and boils were common, partly because of working with salty rope and canvas, but also because of micro-organisms which live naturally on the skin of the whale.  Unsurprisingly, mishaps happened when a man lost his balance on the decks or in the rigging.  Cuts and bruises could be due to more than simple accidents—during shipboard fights, for instance, or after after the first mate caught them slacking on duty.
Mary Stickney failed to describe what she prescribed for all these ailments, merely noting that she had carried “1 Paper box of Medacine” on board, but her journal is eloquent testimony that whaling was a rough life, and a tough one for all on board.  One man, Will Winslow, was very ill indeed, being both feverish and delirious, but was back on lookout at the masthead the instant his head was clear enough to keep his balance—and somehow it is not a surprise, either, to find that Mary was famous for keeping a talking parrot on her shoulder.

Posted by World of the Written Word at 9:33 AM No comments:
Email ThisBlogThis!Share to TwitterShare to FacebookShare to Pinterest 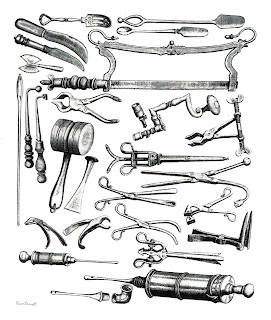 American ships did not carry a surgeon.

Indeed, if the ship displaced less than 150 tons and the crew numbered no more than six, there was not even a requirement to carry a medical chest, meaning that the skipper—the man in charge of shipboard health—did his best by improvising from the pantry, his wife’s sewing box, and the carpenter’s tool chest.

On whalers—which by definition were overmanned, six men being necessary to crew each boat, and at least four men having to stay on board to keep the ship while the whaleboats were in the chase—a medicine chest was standard, along with a little medical guide.  Whether the medical guide was consulted very deeply is debatable, however, because it was a most unusual whaling master who did not have his own pet remedies, which he used in preference to anything thought up by a so-called professional.

“Remedy for Piles,” wrote the master of the Good Return in 1844:  “take twice a day 20 drops of Balsam Copavia on sugar and a light dose of salts daily and use mercurial ointment on the fundamental extremity”—and signed it “John Swift, MD when necessary.”  According to legend, the amputation of limbs was embarked upon just as lightheartedly—and it does seem that some American whaling masters did remarkably well with their sleeves rolled up and a knife or a saw in their hands.  Tales of their resourcefulness are legion.

One yarn relates the amazing feat accomplished by Captain Charles Ray of the Nantucket whaleship Norman, 1855-1860, whose third mate, Mr. King, was taken out of a boat by a whale, his right foot entangled in the line.  After cutting the poor fellow free, Ray took him on board, cut off the foot above the ankle, sewed the flap—and went back and killed the whale.

Captain Jim Huntting of Southampton, Long Island faced a similar problem when one of his men got both hand and foot entangled.  Collecting up an armory of carving knife, carpenter’s saw, a fishhook, and a sail needle, Huntting lashed the screaming patient to the carpenter’s bench, dressed the hand and amputated the foot.  He had to keep on summoning new assistants, because the seamen who were ordered to help kept on fainting.

Trickier still was the challenge faced by a Captain Coffin who was taken down by a line himself, and whose leg was so mangled that it obviously had to go.  So he sent for his pistol and a knife, and then he said to his first mate, “Now sir, you gotta chop off this here leg, and if you flinch, sir, you get shot in the head.”  And Captain Coffin sat as steady as a rock with the pistol aimed as his mate went at it with the knife.  No sooner was the wound dressed and the leg thrown overboard, than both men promptly fainted.

Posted by World of the Written Word at 9:27 AM No comments:
Email ThisBlogThis!Share to TwitterShare to FacebookShare to Pinterest
Newer Posts Older Posts Home
Subscribe to: Posts (Atom)