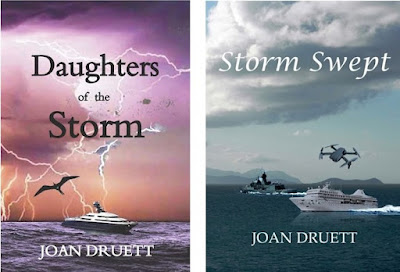 Storm Swept, the second in the Bacchante series.

Harold Pcderson’s discovery ships are in trouble. Specializing in exploring remote estuaries and photographing endangered wildlife in South East Asia and the western Pacific, his fleet ventures into waters that are rife with pirates.

When Jerry Giacomo is hired by Pederson to make his ships look bullet-proof, he finds that the situation is even more precarious than expected. The Jihadist breakaway group Abu Sayyaf is operating in the South China Sea, and their brutality is notorious, with filmed beheadings as well as outrageous ransom demands.  Because of the threat the terrorists present, Storm Swept, with all the Bacchantes on board, is requisitioned by the British navy, to take part in an exercise up a remote river in Borneo, where the pirates have their lair.

At the same time, Helen Pederson is trapped in a remote village in Mexico, being blackmailed by her first husband. When she mnages to confide her dilemma to Jerry and Skye, the Bacchantes are forced to face yet another great challenge. The paternity of the girls has been brought into question yet again.

And the answer could be fatal.

And -- to celebrate the publication of Storm Swept, for the month of April Daughters of the Storm will be half-price on all platforms except Amazon (which won't let me do it). 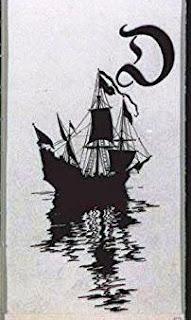 Posted by World of the Written Word at 3:14 PM No comments:
Email ThisBlogThis!Share to TwitterShare to FacebookShare to Pinterest
Newer Posts Older Posts Home
Subscribe to: Posts (Atom)