I found Dark Matter such an interesting book that I wanted to read more of this author. I should have been warned by the fact that it was lingering in the stacks of the city library, unloved and unread.

What I found most annoying, however, was the protagonist. He is such a gormless wonder, no fight or resourcefulness at all. At one stage he has a loaded gun in his hand, with instructions to murder a bound and helpless victim. Considering the horrors he has witnessed, the obvious move is to shoot the killer, and then shoot himself. But no, he tamely carries out the murder, as ordered.

Whatever nastiness is awaiting him in the rest of the book, he fully deserves it.
Posted by World of the Written Word at 8:52 AM No comments:
Email ThisBlogThis!Share to TwitterShare to FacebookShare to Pinterest 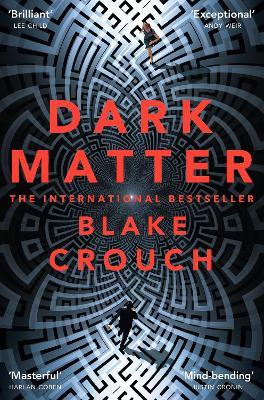 Blake Crouch is a new writer for me. I picked this up after reading a rave review of his latest - which is not out in New Zealand yet - as I felt curious.

As the review hinted, the writing style is interesting.  I am a fan of Simon Kernick's thrillers, which are written in short sentences, with short chapters, along with non-stop action that keeps the pages turning.  I also love Hugh Howey's wildly imaginative dystopia novels (Wool, Shift, Dust, Sand) which are brisk, compelling reads, too.  Well, Crouch is a blend of both.

Not a bad thriller writer at all -- if one can forgive the use of "like" where "as if" is a lot mor logical and elegant. ("Like" is a preposition, and should be followed by a noun and nothing else, as in she slept like a baby; "as if" is a conjunction and is followed by a clause -- he ran as if pursued by a thousand devils). And, on the whole, the imagination isn't lacking, either. If his style is Kernick meets Howey, his theme is Stephen King meets Michael Crichton.

It is hard to write a review of this thriller - mystery - fantasy novel without spoilers, but if you have ever thought back on your past and wondered what would have happened if you had taken a different turn in your life's journey, this book is perfect for you.

Jason, the protagonist, is faced with exactly that situation -- but with no control over the turning whatsoever.  He is a helpless victim of a metaphysical experiment.

Walking back home at night, thinking of nothing much but the dinner and glass of wine with his beloved family that awaits, but simmering a little because a past classmate has won the great scientific award that should rightfully be his, Jason is captured,  and forced to turn that different path.

Many different paths, in fact, each leading to a different apocalypse. There is contagion, there is famine, and there is war.  Pollution and global warming should be there, too: this is the one and only part of the book that lacks imagination.  But the book is otherwise great, with a slam-dunk conclusion.

Read it, and see what you think.  Definitely different.  And definitely readable.

Posted by World of the Written Word at 2:08 PM No comments:
Email ThisBlogThis!Share to TwitterShare to FacebookShare to Pinterest

Posted by World of the Written Word at 9:28 AM No comments:
Email ThisBlogThis!Share to TwitterShare to FacebookShare to Pinterest
Newer Posts Older Posts Home
Subscribe to: Posts (Atom)