Simon's Cat has a new book

Can you imagine the self-absorbed feline having kitten-competition in the home?

Well, it happened, and it has been turned into a book, to follow a rash of great new Simon's Cat cartoons on YouTube.

And the book had its launch in a cinema 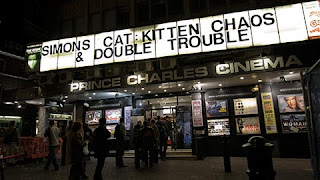 The great event took place at the Prince Charles cinema in Leicester Square, London. Special invitations were sent out to competition winners from the Simon's Cat website, as well as winners from the Daily Mirror newspaper.

Predictably, the entertainment was firstclass, with a "Double Trouble" cartoon shown on the big screem, and lots of input from the cartoonist (and cat owner) himself.

And naturally, a video of the book launch was produced.  You can view it HERE
Posted by World of the Written Word at 4:43 PM
Email ThisBlogThis!Share to TwitterShare to FacebookShare to Pinterest