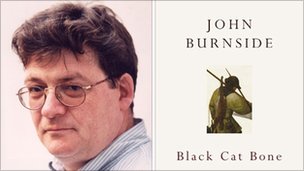 John Burnside has been named the winner of the £15,000 TS Eliot Prize for Poetry for his collection Black Cat Bone.

This year's prize has proved controversial, with two poets withdrawing because of its sponsorship by an investment company.

Burnside, 56, who chose to read a poem instead of make a speech, told the BBC he was "stunned" to have been chosen.

He said he had never considered withdrawing over the sponsorship issue.

It is Burnside's second prestigious poetry prize in under six months. The Scottish writer won the £10,000 Forward Prize for the same collection in October.

Posted by World of the Written Word at 12:08 PM
Email ThisBlogThis!Share to TwitterShare to FacebookShare to Pinterest