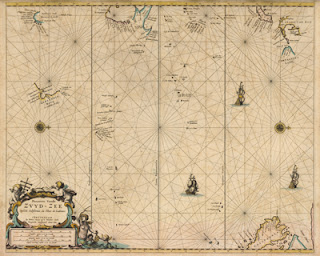 When I was searching for images for Tupaia, Captain Cook's Polynesian Navigator, I got great pleasure from the many beautiful old charts I found.  The map reproduced above was particularly intriguing, because it provided an excellent illustration of how little the old Pacific explorers knew, compared to Polynesian ocean lore.
Engraved by Pieter Goos for his book De zee-atlas ofte water-wereld (Amsterdam, 1667), this "sea-chart" has to be viewed sideways, with California invisibly off to the bottom right, and what little was known of Tasmania ("Van Diemen's Land") and New Zealand hovering about to the top left.  Otherwise, the ocean is almost empty -- not Tahiti, no Samoa, no Tonga, no Fiji -- and yet it was drawn for the use of seagoing folk, such as captains, sailing masters, and trading agents, who intended to venture into this unknown region.
Pieter Goos was the son of Abraham Goos, an Amsterdam bookseller who specialized in maps and charts.  As well as carrying on his father's business, Pieter produced pilot guides for mariners.  His Zee-atlas was a bestseller, going through many editions.
No one, however, kept count of the number of travelers it sent to a watery grave.
I was reminded of this when the captain of the unfortunate Costa Concordia reckoned his ship hit an uncharted rock.
Is such a thing possible today?  Maritime historian Bill Bunting contributed a useful and entertaining comment that demonstrates that even relatively recently all charts were not equal:
Forty-plus years ago I was the mate of a sailing vessel engaged on a  world voyage (he says). Previous owners had outfitted her chart locker with  British, German, and US charts for many Pacific island areas. The British charts were aesthetically the most beautiful, as elaborately engraved as old bank notes, and imparting more than a whiff of  empire, except that, with no colors, it was often not easy to figure  out where the water ended and the land began. Lines of soundings were  likely to be attributed to the HMS PINAFORE or whatever a hundred or  more years ago, although presumably these were better than nothing.
The German charts were by far the most detailed, especially regarding  features of the land, except that it appeared that many of the island  hills and valleys were boilerplate added to fill in spaces which if left blank might suggest less than complete and thorough knowledge.
The US charts were the most utilitarian, and did not hesitate to display ignorance when appropriate. With an obvious color scheme  differentiating land from water, they were the easiest to use and  thus the charts of choice, even though they projected all the romance of a gas station road map.
﻿
Posted by World of the Written Word at 10:36 AM
Email ThisBlogThis!Share to TwitterShare to FacebookShare to Pinterest