Lord Byron was a dieter 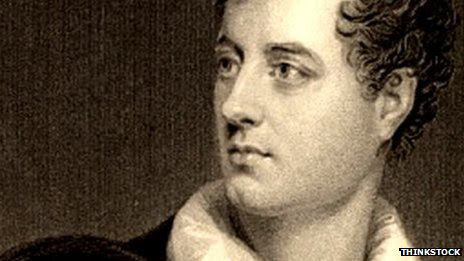 Another new year and another host of celebrity dieters, but it's not a modern phenomenon. Lord Byron was one of first diet icons and helped kick off the public's obsession with how celebrities lose weight, says historian Louise Foxcroft.
There has never been any shortage of celebrities who have followed diets, endorsed them or tried to sell us one of their own devising, even back as far as the 1800s.

The "mad, bad, and dangerous to know" Lord Byron was thought of as the embodiment of the ethereal poet, but he actually had a "morbid propensity to fatten". Like today's celebrities, he worked hard to maintain his figure.

At Cambridge University, his horror of being fat led to a shockingly strict diet, partly to get thin and partly to keep his mind sharp. Existing on biscuits and soda water or potatoes drenched in vinegar, he wore woolly layers to sweat off the pounds and measured himself obsessively. Then he binged on huge meals, finishing off with a necessarily large dose of magnesia.

From the BBC News Magazine
Read the rest of this fascinating story HERE
Louise Foxcroft is the author of Calories and Corsets
Posted by World of the Written Word at 8:08 AM
Email ThisBlogThis!Share to TwitterShare to FacebookShare to Pinterest