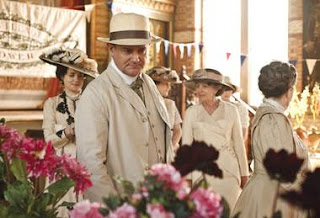 "Why have Americans fallen for a show that serves up snobbery by the bucketful?"

"Yes, I know it’s perfect in its way," he writes. "Nothing beats British television drama for servicing the instincts of cultural necrophilia. So the series is fabulously frocked, and acted, and overacted, and hyper-overacted by all the Usual Suspects in keeping with their allotted roles. There’s Carson, the beetle-browed butler. (My favorite in the endless parade of butlerian clichés was Rabbits, the butler in H. G. Wells’s hymn of hate to the lordly house, Tono-Bungay.) Maggie Smith does her tungsten-corseted, eye-rolling, nostril-curling, glottal-gurgle as only she can—half Lady Bracknell, half Queen Mary (the unfailingly erect consort of King George V). Julian Fellowes has gotten this stuff down pat since writing Gosford Park, though all the main plot lines were anticipated a long time ago by Upstairs, Downstairs."

Well, you get the drift by now.  But for some marvellously passionate, well crafted prose, read the rest HERE.

In the past, Julian Fellowes has neglected the golden rule of writers -- never, ever respond to an unfavorable review -- and snapped right back.

Responding to people who accused the show of using anachronistic language and etiquette, he declared,  "The real problem is with people who are insecure socially, and they think to show how smart they are by picking holes in the programme to promote their own poshness and to show that their knowledge is greater than your knowledge."

Oh my.  One can only wait for his reaction to this latest scathing commentary.

He should relax.  Let's face it, for all its shortcomings, its lack of originality, and its stereotyped themes, Downton Abbey is incredibly addictive.

Posted by World of the Written Word at 3:58 PM
Email ThisBlogThis!Share to TwitterShare to FacebookShare to Pinterest

Well that was an absolute joy to read. Thanks for the link. And oh dear, Julian, your thin skin is showing!

Every aspect of the show is well researched except the flipping script. That is full of cliches, anachronisms, historical faux pas and plain old bum notes. The best of it is borrowed from elsewhere - namely, every other TV drama series about the period that JF has seen, plus old Coronation Street plots...

So watch it for the costumes and interiors, and Maggie Smith doing her customary lemon drops, by all means, but try to ignore the rest.

Hey, Joan, you're as ambivalent as I am! Criticize the posturing writer as I may, I am still looking forward to the Christmas Special (starts February 1). I believe you Christchurch folks had a sleepless night last night ...