Haunted by her own book

Some books haunt the reader. Others haunt the writer. The Handmaid's Tale has done both. 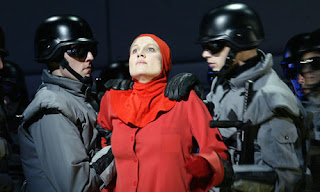 It has never been out of print.  It has been made into a film, and adapted for opera.  For some, it has become a synonym for the repression of women.  It has been admired and reviled.  And it's a book that haunts the writer.
Using the diary she kept at the time, Margaret Atwood reflects on the extraordinary effect The Handmaid's Tale  has had on the world and herself.
It's a strange and yes, a haunting story.  Read it in The Guardian.
Posted by World of the Written Word at 8:30 AM
Email ThisBlogThis!Share to TwitterShare to FacebookShare to Pinterest