Word for the Weekend: Menhaden 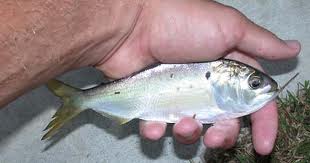 It's a fish, a very small American fish.  Also known as moss bunker, bunker, and pogy, it has been harvested for fertilizer since time immemorial.

Indeed, the name comes from the Algonquin word munnawhat, which means fertilizer.

Despite someone having fun in the food section of the Wikipedia entry, it is not generally considered to be edible, though it was once experimentally canned as "Ocean Trout."  Instead, it is harvested by the million for fertilizer and fish meal -- and the Omega fish oil that you swallow in capsule form for your health.  It's greatest importance, however, is its place in the food chain.  Like krill for giant whales, it is a necessary part of the diet of larger species.  Removing menhaden from the sea is another step in the wrecking of our planet.

This message is explored in a very well-reviewed book about this little fish, called The Most Important Fish in the Sea: Menhaden and America,  by H. Bruce Franklin.  It is worth hunting up the entry on Amazon, if only just to read the extremely well-written review by Mark McDonough.

In fact, whales played a surprisingly important part in the history of menhaden. As the great whales were "fished" out, reducing huge catches of menhaden as an alternative for lubricant oil became quite an industry, and schooners called "moss bunkers" became quite a common sight on the eastern coasts of America. As there was no refrigeration, the menhaden were just allowed to rot, so the moss bunkers could be smelled quite a long time before they came into sight. Working on them could not have been fun.
From maritime historian Bill Bunting:
There is a tale of a certain 3-masted schooner which loaded a cargo of "fish scrap" -- putrified processed pogy, pogy being an oily industrial fish once unsuccessfully canned as "Ocean Trout" -- at Promised Land, on Eastern Long Island, for Norfolk, where the maggoty scrap was to became a component of fertilizer. Initially the stench was all but overpowering to the schooner's people, but evidently the human olfactory system is designed to shut down in self-defense when confronted with an extreme situation, and by the time port was made the stench did not seem all that bad. But this proved to be an illusion when the captain, wife, and daughter boarded a street car only to have the other occupants depart post haste.
Posted by World of the Written Word at 7:54 AM
Email ThisBlogThis!Share to TwitterShare to FacebookShare to Pinterest