Has the earth moved? 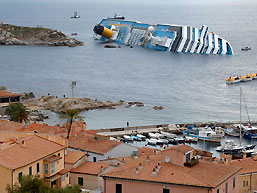 Earth scientists studying the after-effects of last year’s Japan earthquake, registering a 10 on the Richter scale, have discovered that the shifting continental plates have tilted the earth a little further on its axis. The result is a tiny, but measurable, alteration in time, distance and position in space.

According to New Zealand website SunLive, the news that the earth has moved didn’t surprise Tauranga resident Minnie Driver, who claims that her recent accident on Cameron Road was a direct result of her sat-nav being suddenly inaccurate.

“It’s been fine for ages, but since the earthquake it keeps telling me to turn about 25 metres before I get to the junction I want. True, I’ve met some interesting people, and surprised a few who were sweeping their drives, but this is clearly a new problem. I’ve spoken to makers Tom Tom, but they have investigated and blame lunchtime drinking. That’s scandalous, and probably only partly true.”

Other supposedly incompetent drivers have now come forward, and been joined by numerous other GPS users including trampers & boaties, many of whom have been hopelessly lost and branded as ‘stupid’ by emergency service staff.

They claim that GPS systems haven’t accounted for the shift in Earth’s position.

The captain of the Costa Concordia has claimed that the rock wasn’t on his chart.

Will he now tell the world that the ‘earth moved’ for him?

It must be the holiday atmosphere.
Posted by World of the Written Word at 9:50 AM
Email ThisBlogThis!Share to TwitterShare to FacebookShare to Pinterest