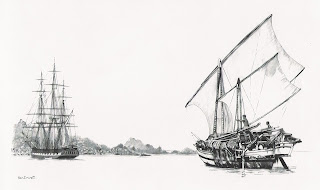 At last count, Wiki Coffin could speak five Polynesian dialects, as well as English, Portuguese, and Bahasa, the lingua franca of the South China Sea

In the stories, picking up the local language is a case of necessity, as well as convenience.  He's just plain lucky that he can do it.

Wiki's ability to absorb foreign tongues is by no means unique, however.

Publisher HarperCollins has been searching for the UK's most multilingual student, and has discovered a 20-year-old Oxford University undergraduate who can speak 11 languages. And a new book, Babel No More: The Search for the World's Most Extraordinary Language Learners, by Michael Erard, suggests that some linguistically gifted people learn new languages just for fun.

In the UK, there has been a growing anxiety over the failure to learn additional languages. More and more children have been giving up even trying to grapple with foreign verbs and nouns since the last government made learning foreign languages optional in England from the age of 14.  Fortunately, however, as Vanessa Barford describes in a story in the BBC News Magazine, there are many people who want to speak a second language.  And, for some people, two can never be enough. They might not even settle for twenty.

Welcome to the world of the hyperpolyglot.
Posted by World of the Written Word at 9:18 AM
Email ThisBlogThis!Share to TwitterShare to FacebookShare to Pinterest