The New Zealand Listener publishes regular columns by this well-known economist, which are pungent as well as well-informed and entertaining. 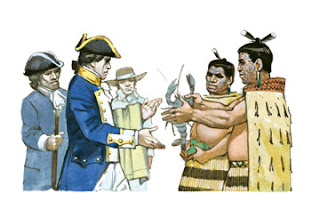 The column (published January 7) is called Value In Goods Exchange


"Perceptions of value in an exchange of goods can be clouded by cultural assumptions," he begins:
My marginal contribution to maritime historian Joan Druett’s book Tupaia: Captain Cook’s Polynesian Navigator was to comment at a dinner table that the Tahitian chief’s considerable part in the development of New Zealand was hardly acknowledged. The observation was made as I talked about how often, in the course of a history of New Zealand I am writing, I had to think in a different cultural context from my own.

Histories of Pacific exploration focus on Cook, relegating Tupaia to a minor role. Yet without him, Cook’s visit to New Zealand would have been much less enlightening, for despite the Maori’s ancestors having left central Polynesia 500 years earlier, Tupaia was able to engage with them in language and cultural terms.

Much of what Cook tells us was learnt from Tupaia. Yet whereas Cook rightly appears in The Dictionary of New Zealand Biography, there is no entry for Tupaia. The dictionary records the exploration of the Pacific through European eyes.

As you can see from the image reproduced above, it was illustrated with what appears to be a quick sketch in imitation of Tupaia's famous caricature of Joseph Banks swapping a piece of tapa cloth for a crayfish.  This lively version seems to be inspired more by the film "Master and Commander" than Tupaia's actual artwork.

Something which a discerning Christchurch reader noticed, leading to this amusing letter:

The picture illustrating Brian Easton’s excellent Economy (January 7) shows a previously unknown European encounter with Maori, who presented the men with a creature new to them – a lobster. Either that or the Maori are showing the visitors a local crustacean, a giant freshwater crayfish (now apparently extinct; current species do not exceed 16cm in length).

Or perhaps the artist did not realise New Zealand saltwater crayfish do not have the spectacular claws of the lobsters found off the northeast and northwest coasts of the Atlantic. He or she should have taken more notice of the eyewitness drawing by Tupaia, who saw such an exchange and got it right.

As the Listener has a reputation for accuracy, it may like to add to its checking processes a requirement that all pictures of New Zealand saltwater crayfish show them without claws. As a motivator to accuracy, providers of faulty illustrations could be required to buy a large crayfish, draw it from life, then have it sent, in edible condition, to the writer. I can provide my address on request for such delivery.

Bruce Tulloch
(Bishopdale, Christchurch)
Posted by World of the Written Word at 9:10 AM
Email ThisBlogThis!Share to TwitterShare to FacebookShare to Pinterest