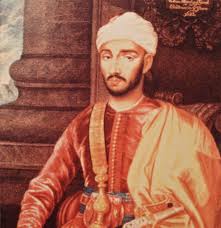 His name was Mulai Ismail, and he was a sadist on an epic scale.  He once sawed a living man in half vertically , and he kept a menagerie of wild beasts he fed with screaming slaves.

He was also a very active progenitor, notorious for seizing and impregnating captured Christian virgins, despite having a huge harem at his disposal.  By the time he died, in 1727, he had sired at least 500 sons.

A fascinating article by the evolutionary anthropologist, Laura Betzig, which is currently in press at the journal Evolution & Human Behavior, points out that this kind of predation on women was not at all uncommon.  In studies of emerging civilizations in Mesopotamia, Egypt, India, China, Mexico and Peru, she has consistently found a deliberately created system where powerful leaders "harvested" hundreds of young women and systematically impregnated them.

"In China they had it down to a science," she said.  "Yangdi, the 6th-century Sui dynasty emperor, was credited by an official historian with 100,000 women in his palace at Yangzhou alone."

And it happened in Europe, too, where for generations it was reluctantly accepted that the lord of the manor had first rights to the village women, in the system called droit seigneur. As Laura Betzig remarks, "Lords then had sexual access to hundreds of dependent serfs."

This sexual exploitation of the vulnerable masses came to an end with the European discovery of the Americas, Betzig point out.  Migration to the new land offered an escape from despotic regimes for millions of people -- millions who were carrying with them the new notions of democracy.  She is to publish a book, The Badge of Lost Innocence in which she explores this further.

In the meantime, however, the genes of those greedy, violent, sexually predatory despots have been passed down to millions of living people.

Does this help to account for contemporary greed, violence, and worldwide abuse of power?

It's an interesting thought.
Posted by World of the Written Word at 10:43 AM
Email ThisBlogThis!Share to TwitterShare to FacebookShare to Pinterest

How Messrs Berlusconi, Strauss-Kahn etc must long for the good old days when swords took the place of chequebooks.

However, although I endorse your questions pondering the role of inherited rogue genes in modern criminality and aggression, I'd just advise that this is not a discussion to have with Australians. They get frightfully cross.

Apropos of that, there is a very good exhibit on convict ships at the Aussie Maritime Museum in Sydney