Shakespeare's Globe to feature in "Space" 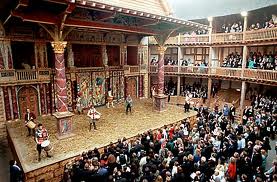 By Jenny Minard for the BBC
Shakespeare's Globe and the John Peel Centre have been confirmed as organisations involved in a new digital project as part of London 2012.

The Space - a multi-platform initiative - was launched to showcase some of the best digital art works in the country.

It has commissioned 53 projects to be broadcast on computers, mobiles, tablet computers and internet-connected TVs.

The British Film Institute will also get involved and provide films, some of which have not been seen before.

Run by Arts Council England and the BBC, the aim is to build the digital skills and capability of the sector in the run-up to the Olympics.

"The Space will stimulate a dramatic step change in skills development, creative learning and collaboration," Alan Davey, chief executive of Arts Council England said.
Posted by World of the Written Word at 8:37 AM
Email ThisBlogThis!Share to TwitterShare to FacebookShare to Pinterest