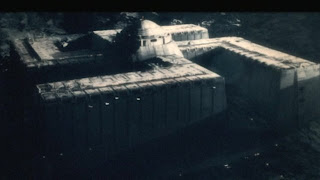 A Finnish sci-fi comedy about Nazis invading Earth has become the favorite conversation topic at this year's Berlin Film Festival.

Iron Sky is a B-movie spoof that has been screening at the Festival's sidebar event, called Panorama.
The plot revolves around a group of Nazis who escape to the moon at the end of World War II, whose descendants plan a new assault.

The film is slightly futuristic, being set in 2018, when a Nazi soldier comes face to face with a US astronaut.

Added to the farce is a US President with more than a passing resemblance to former Alaska governor Sarah Palin, and a navy cruiser called the USS George W Bush.

Iron Sky's production team have appropriated the conspiracy theory that the Nazis had an advanced UFO project during World War II.


Even the financing arrangements were original --  most of the funding for the £7m project was obtained after an online appeal to fans.
After successfully using the public to generate funding, its producers aim to launch a series of comics and licensed merchandise.

Director Timo Vuorensola (whose last work was a Star Trek pastiche called Star Wreck) describes Iron Sky as a "stupid joke" -- and it has had some pretty terrible reviews.  Nonetheless, I can't wait to see it.

Posted by World of the Written Word at 9:21 AM
Email ThisBlogThis!Share to TwitterShare to FacebookShare to Pinterest

1. Screw the critics, I am going to Finland this Paril to see the movie (not sure it'll be screening in Ukraine, plus I already bought airplane tickets :) )

2. Of the movie's budget, only 15% were raised by the community.

I assume you live in the Ukraine? It's lucky you are fluent in English so you can read the subtitles.

I've told so many people about this film because I think the premise is a hoot. I wish I knew the ending ... but probably will never find out, as I doubt it will come to New Zealand.