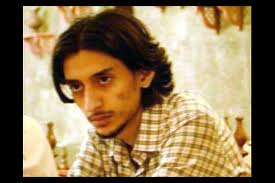 The Malaysian government has defended its deportation of a Saudi journalist accused of insulting the Prophet Muhammad in a tweet.
Home Minister Hishamuddin Hussein said the deportation to Saudi Arabia was legal and that Malaysia cannot be seen as a safe haven.

Hamza Kashgari, 23, (pictured) was sent back to Saudi Arabia (where, it is reported, he is likely to receive 500 lashes) on Sunday.

Insulting the prophet is considered blasphemous in Islam and can be punishable by death in Saudi Arabia.

He has since removed the tweet and apologised for his comments -- in which he had confessed to ambivalent feelings about the prophet.

Posted by World of the Written Word at 7:39 AM
Email ThisBlogThis!Share to TwitterShare to FacebookShare to Pinterest