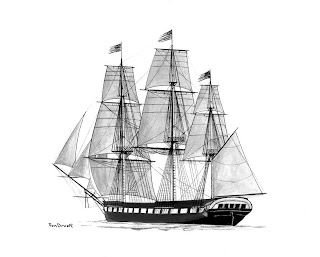 A Secret Mission for the British Admiralty, 1802

The War with the French is over ... temporarily ... but the British government is gearing up for another confrontation, this time with Napoleon.

The catch:  The British government is desperately in need of money to finance this new war.

Enter Captain Oliver Quintrell, living comfortably on prize money, but eager for another command.  His wishes are granted when he is given the frigate Elusive.

The catch: His secret mission is to sail into icy waters far south of Cape Horn, in search of a rumored treasure.  If he succeeds, the British treasury will be saved.  The price of failure is awful beyond reckoning . . .

It has recently become a popular ploy for authors who have obtained reversion of rights (and, hopefully, the pdf, as well) to re-publish their books with one of the many presses that have sprung up to meet the demand.

Margaret Muir's historical maritime adventure, Floating Gold, originally published by Robert Hale, has been given a fresh breath of life in this way -- and, in this case, most worthily so.  Re-designed and re-issued in paperback (with the author's name cropped to the genderless "M C Muir"), this Hornblower-style novel is replete with maritime detail:  it is obvious that Muir knows her ropes, and is comfortable with shiphandling, even under brooding skies.  Ports are given good treatment, too. Her descriptions of Deception Island, the strange and ominous island in the sub-Antarctic where the Elusive finds a most unusual anchorage, are evocative and intriguing.  And the story fairly romps along.

Her characters are convincing, too.  Though just 32 years old, Captain Oliver Quintrell talks and acts like a man in his fifties -- which is exactly right for his era, when men aged much earlier.  The "idlers" -- the tradesmen of the ship, like "Chips" the carpenter and "Bungs" the cooper -- stand out particularly well, being drawn with humanity and humor.  And then there is the young apprentice shipwright,  Will Ethridge, plucked from the sea like a piece of flotsam, destined to play an important role in the drama to come.

A most enjoyable read.  I look forward to more from Muir's pen.

Posted by World of the Written Word at 4:11 PM
Email ThisBlogThis!Share to TwitterShare to FacebookShare to Pinterest

Thank you for taking the time to review FLOATING GOLD and for including me on your blog.
I'm pleased to say that the sequel is progressing well.
Margaret Muir

Aye aye! A crack review of a well-crafted novel.

I can't argue with a word of this - cracking good read!