What can beat the sound of the wind and the waves? 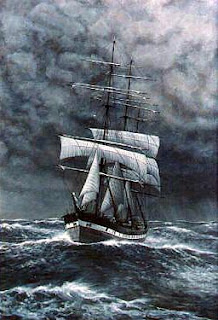 Nothing, in my opinion.

Just recently, folks on the great facebook site, All things nautical, have been posting videos of storms at sea.

Here is one that is really stomach-churning and spectacular

What ruins it, in my opinion, is the intrusive music.

And now, I hear, music is going to come with eBooks.

The first to have background music was the YA novel The Power of Six by Pittacus Lore.

Then came The Adventures of Huckleberry Finn, Jane Eyre, Romeo and Juliet, and The Three Musketeers.

Oh dear, the ashes of those great old writers must be rotating in their graves.

But the producers of this musical background treacle are proud of themselves.  Paul Cameron of Booktrack (who is all of 35 years old) told the NYT, "It makes a new and engaging way to read."

Not only does it "enhance the experience" but it titillates the imagination "and keeps you in the story longer."

Two new musically enhanced books came out toward the end of the year: Solace by Jay McInerney and -- I don't believe it! -- In the South by no less than Salman Rushdie.

You pay three bucks extra for the sound-enhanced versions, and you have to go to Apple's App Store to get them.

Believe me, I won't be trying.

And, by the way, the painting is of the old grain-carrier Grace Harwar, and is created by my husband, Ron Druett
Posted by World of the Written Word at 8:20 PM
Email ThisBlogThis!Share to TwitterShare to FacebookShare to Pinterest

I agree with you about not adding music to existing pieces of literature, which surely stand alone without an accompanying soundtrack. However, I've written a contemporary young adult novel that incorporates lyrics of popular songs. This short novel could be produced in a format that includes the music as a soundtrack, or the manuscript could serve as a guideline for a movie script, with suggestions for soundtrack. The music I chose is iconic to contemporary American life and is organic to the story. Will it work? Who knows! It was an experiment.

A brave experiment! Will the eBook cost more than the non-musical version? That could be a factor in whether it sells or not. The other thing I would worry about is the personal tastes of the reader. Those who hate sea shanties (for instance) could be turned off a really good story. I'm most intrigued to learn how it fares -- well for you, I hope.