Henry David Thoreau declared that he would rather go to jail than pay taxes that contributed to causes he didn't believe in (such as the war with Mexico). Now the man who devised the philosophy of civil disobedience has inspired a video game -- one that presumably illustrates the same credo. 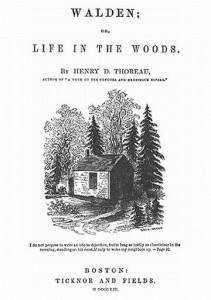 The University of Southern California has received a $40,000 grant from the National Endowment for the Arts to produce a video game based on the work of Henry David Thoreau.

Here’s more about the project: “To support production costs for a video game based on the writings of Henry David Thoreau at Walden Pond. The player will inhabit an open, three-dimensional game world which will simulate the geography and environment of Walden Woods. Once developed, the game will be available online.”

You can download free eBook edition of Thoreau’s Walden at this link. At the same time, a number of PBS shows saw significant reductions or cuts in their NEA grants this year.

Story by Jason Boog.  Read the rest at GalleyCat.
Posted by World of the Written Word at 9:39 AM
Email ThisBlogThis!Share to TwitterShare to FacebookShare to Pinterest

This does sound like a joke. I think we can safely rule out the single person shooter format.

I admire Thoreau but it is beyond my limited imagination to visualize an engaging video game based on his life or works.

It will either be a castaway-style story -- day-to-day survival in a hut in the woods, or a political battle -- fighting off the nasty tax collectors, those representatives of the government who interfere with people who simply want to get on with collecting riches and making sure that they are taxed as little as possible. Taken seriously it could segue into the story of Gandhi and the successes and failures of the civil disobedience movement, but what do you bet that the castaway option is the way they will go?

The NEA used to be very liberal, up until the fracas over the Emma Gay. What is the philosophy now?

You may not be aware of other, more contemplative options: check out the games FLOWER and JOURNEY as examples. Exploration unlocks poetry, perhaps. Not likely to be a standard videogame - insufficient budget, for starters.

I did think that $40,000 was pretty small beans, particularly when compared with the NEH grant for the Burns Lewis/Clark documentary.