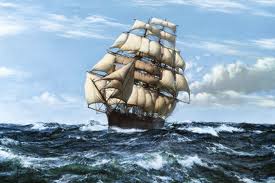 The Queen officially reopens the Cutty Sark in Greenwich five years after it was ravaged by fire.

The clipper, which has been restored at a cost of more than £50m, is now elevated so visitors can see it from underneath as well as climb aboard.

After the Queen unveiled the Cutty Sark, the royal couple moved inside to view the clipper's cramped decks that during its working life were filled with tea from China.

Richard Doughty, director of the Cutty Sark Trust, described the vessel as "spectacular" and said: "We have a ship fit for the Queen and we're very proud Her Majesty and the Duke of Edinburgh have come to open the site.

"Fifty-five years on from when she first came, it's a very different experience, offering a light environment in the Cutty Sark's new elevated position."

The 2007 fire was caused by an industrial vacuum cleaner which had been left switched on for two days while a conservation project was being carried out to repair Cutty Sark's iron framework.

Fortunately, the ship's masts, saloon and deckhouses had been removed and put into storage in Kent when the fire took hold.

The painting of the lovely old tea clipper in her heyday is by Montague Dawson. We used to have it on a tea-tray ...

Read the full BBC story
Posted by World of the Written Word at 8:34 AM
Email ThisBlogThis!Share to TwitterShare to FacebookShare to Pinterest

Wow! I had not read about the fire. I was there in 2005 when I was doing research at the NMM. SO glad to hear the old girl has been patched back up. : ))

It makes the flight to London worthwhile ... AFTER the Olympics!