The first appearance of a young Ned Kelly in court documents has gone under the hammer. 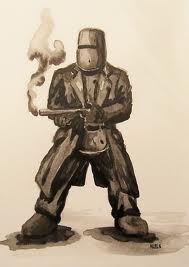 The ledger of the Beechworth Court of General Sessions was sold for $25,000 at an estate sale in Hobart.

Auctioneer Russell Thomson says the infamous bushranger was 15 when he first faced the Beechworth court.

"Just one entry there, but it also goes through other bushrangers and everyone else," he said.
"There's a few other different entries there of the Kelly gang and so forth."

The book was bought by local art dealer Nevin Hurst.

Mr Thomson says there is an interesting story about how the book was initially found.
"He picked up this one book, he didn't know what was inside it, it just had a leather binding on the back," Mr Thomson said.

"And he said 'ah that'd be great, there's pages in it for the kids to scribble on', and he said 'do you mind if I take that one' - so that's how it was saved from the incinerator."

Kelly was captured after a shootout with police at Glenrowan in Victoria in June 1880.
He was hanged for murder that year and buried at Melbourne's Pentridge Prison.
Posted by World of the Written Word at 4:53 PM
Email ThisBlogThis!Share to TwitterShare to FacebookShare to Pinterest