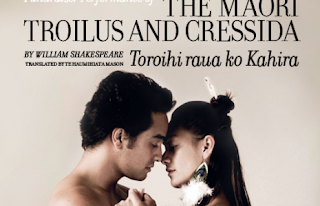 A performance of Troilus and Cressida in Maori has kicked off an international festival in Britain, where Shakespeare is being staged in many tongues.

The Globe to Globe Festival opened yesterday (the Bard's birthday) with the Maori translation of the deathless tragedy of love, infidelity, hubris, and misplaced heroism.  (It would be more logical to have it in Greek, being a saga of the Trojan War, but never mind; the Maori version is beautiful.)

The Festival will also feature Hamlet in Lithuanian, Cymbeline in Sudanese, and a sign-language version of Lave Labour's Lost.
Posted by World of the Written Word at 9:24 AM
Email ThisBlogThis!Share to TwitterShare to FacebookShare to Pinterest