Journo to be deported from Zimbabwe 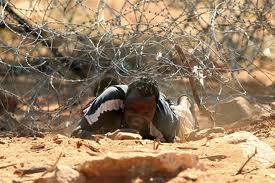 He had been to to hot spots like Rwanda, Kazakhstan, Egypt, so he was arrested as a spy from New Zealand ...
Robin Hammond, who was In Zimbabwe working on a story about the movement of refugees from that country to South Africa, was arrested on Monday local time with charity worker Bertha Chiguvare in the border town of Beitbridge, 580km south of Harare.

Mr Hammond was convicted of contravening a section of the Protected Areas and Places Act for taking photos in a protected area, and fined $US150 ($NZ184).
Zimbabwean journalist Columbus Mavhunga has spoken to Mr Hammond's lawyer and police, who told him Mr Hammond will be driven about 600km to Harare on Friday local time for deportation to New Zealand.
"They are saying he had not declared he is a journalist," Mr Mavhunga told Radio New Zealand.
"They say his passport showed ... he has been to hot spots, like Rwanda, Kazakhstan, Egypt, so they suspect that he is a spy from New Zealand, so they would want to deport him back to his land of origin."
Mr Hammond's lawyer told Mr Mavhunga he had spoken with the British embassy in Zimbabwe, which was assisting the New Zealand High Commission based in Pretoria, South Africa.
The embassy had hoped Zimbabwean officials would release the South Africa-based photographer, but that had been rejected.
Mr Hammond's lawyer told Mr Mavhunga the photographer was "in fairly high spirits but he's not as good as he should be ... He was not beaten, but his morale is down."
Video and digital still cameras as well as a voice recorder with excerpts of an interview were found in Mr Hammond's possession, AFP reports.
The media in Zimbabwe is tightly regulated and journalists are not allowed to work in the country without accreditation.

Posted by World of the Written Word at 8:32 AM
Email ThisBlogThis!Share to TwitterShare to FacebookShare to Pinterest