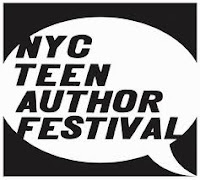 In March the four-year-old Teen Author Festival Week was held yet again, organized by Teen Author David Levithan (pictured below, with fans).   After gathering the supprt of local bookstores and the New York Public Library, he put together a 7-day program involving 70 teen authors at venues all about the city. 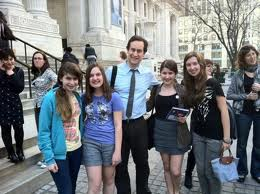 Included in the program were readings, panel discussions, and book signings. The opening event, which was standing room only, featured a discussion of plots and characters.  Eight teen authors grappled with the signature sentence, which was "Plotting dangerously--doing what it takes to find the story."

The moderator was Levithan, who posed his questions with a view of giving the large audience an insight into the plotting process.

When asked "What comes first, plot or character?" Coe Booth replied, "If I wasn't an author, I would be institutionalized because of the voices I hear."

"As a student, I would write my report first and then go back and do the outline," said Deborah Heiligman, who also read from her new young "very" adult novel due out in August, Intentions (Knopf).

It was a hugely successful event, raved about on blogs as well as facebook.  You can scan through these with a quick google hunt, and also read a more sober review on SLJ Teen

Posted by World of the Written Word at 8:33 AM
Email ThisBlogThis!Share to TwitterShare to FacebookShare to Pinterest