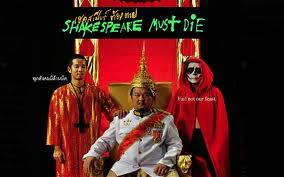 Shakespeare Must Die is a Thai-language adaptation of the play in which an ambitious Scottish general murders the king and kills again to hold on to his throne.  Now, Thai officials won't allow it to be screened.

The film's director, Ing Kanjanavanit, told the BBC the ban was ridiculous.

"Very few films are banned here," she said. "It is amazing they would find a poet dead 400 years such a threat."

Maybe her own words have something to do with the decision.  The report goes on to quote her saying that Thailand's people are "living in a climate of fear".

The story's themes of greed and power appear to have struck an uneasy note with officialdom.  In 2006, Thailand's Prime Minister, Thaksin Shinawatra, was removed from office by a coup, and the country has been riven with divisive views ever since.

The film is set in a fictional country, but uses news footage of Thai political protests.

And in another device that has angered the authorities, the colour red is a prominent symbol.  While this is true to Shakespeare's text, red was also the colour used by anti-government demonstrators.

Ironically, the film was made with government funding.
Posted by World of the Written Word at 8:50 AM
Email ThisBlogThis!Share to TwitterShare to FacebookShare to Pinterest

The banning would be to do with regicide, which would be a sensitive topic in Thailand. The royal family, even those who have died, are revered and any expression that seems to criticise them or otherwise disrespect them is considered Lèse-majesté. An Australian writer went to jail a couple of years ago for depicting a fictional royal prince in what was judged a disrespectful way. Lèse-majesté is today used as a political tool: despite the King publicly speaking out against the law and saying he didn't agree with it, it continues. So I'm not surprised at all that this film was banned in Thailand. I know of a book publisher there who won't consider any submitted manuscripts that mention any Thai royals, living or dead. When I worked as a journalist in Thailand, anything depicting the King had to be cleared through the palace PR department. If his photo was used on a page, it had to be the highest one. This also applied to the Queen Mother (now dead), the Queen and the Crown Prince.