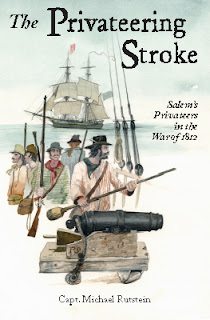 Salem's Privateers in the War of 1812
This looks interesting:  A new -- bargain priced ($15) -- book on the little-covered, yet swashbuckling, history of the privateers of Salem.

By Captain Michael Rutstein, the owner/operator of the schooner "Fame"

During the War of 1812, Salem was in many ways representative of the nation as a whole. Deeply divided over politics and the war, Salemwas home to Republicans and Federalists, privateers and smugglers. Salem sent out 43 cruisers, ranging from 300-ton ships owned by merchant princes to open boats manned by unemployed sailors. Her cruisers roamed the Atlantic from the Irish Sea to the coast of Brazil — and also patrolled the harbors of Maine and Massachusetts, searching out smugglers. The privateers whose careers are covered in this book ran the gamut from scintillating success to abject failure. There are tales here of heroism and cowardice, generosity and greed, astonishing good fortune and deep personal tragedy.
Posted by World of the Written Word at 8:04 AM
Email ThisBlogThis!Share to TwitterShare to FacebookShare to Pinterest