Is the era of the print newspaper coming to an end? 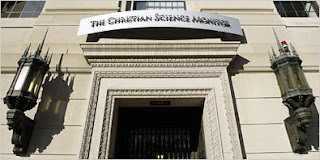 Lost in the glut of dismal news and the world's preoccupation with the US presidential election campaign is a week's worth of bad tidings for the print newspaper you skipped through over breakfast.

On Monday, the Los Angeles Times announced that 75 of its newsroom staff would have to go.

On Tuesday, the Christian Science Monitor announced the end of its weekday print edition. Apart from a weekly magazine edition, you will only be able to read it online.
The publisher of the stable of magazines that includes globally recognizable names like Time, Fortune, and Sports Illustrated, is cutting 600 jobs.
Basically, the problem is because of YOU. And ME. Reading (and writing) online is rapidly replacing the print newspaper, along with the advertisements that paid most of the publishing costs of that newspaper, in the first place. As David Carr comments in his story for the Media section of the New York Times, "A single newspaper ad might cost many thousands of dollars while an online ad might only bring in $20 for each 1,000 customers who see it."
Add that to the fact that the three biggest entities that paid for print advertisements -- the car industry, the retail industry, and the financial services industry -- are in steep decline, the situation for paper newspapers is increasingly dire.
Can traditional print media survive at all? Or will we all be reduced to trawling the murky pool of the worldwide web for in-depth news and commentary?
Watch This Space.
Posted by World of the Written Word at 8:56 AM
Email ThisBlogThis!Share to TwitterShare to FacebookShare to Pinterest

Perhaps this is the “tale of two media” - the best of times and the worst of times. The Internet is fantastic for news readers but bad news for the the producers of news reporting. We have two newspapers delivered to our doorstep daily – the New York Times and a local paper. I also read the Washington Post, Time and a variety of news blogs as well as scanning Google News. As a reader of news, the Internet is a boon. The obvious and daunting problem for the newspapers is to find the means of getting paid.