A blog for nautical books

When he announced this to me, along with a very kind rave about Wiki Coffin, the half-Maori detective of my own historical maritime mystery series, he said it was a blog devoted to nautical fiction. However, the Old Salt Blog offers even more than that. Rick also features a fascinating two-part discussion called "Evolution of the Nautical Hero - From Lord Cochrane to the Wellington Hurricanes," of which the second part is a discussion of writers who are breaking out of the Cochrane archetype. 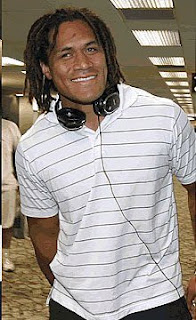 Puzzled? Probably so. The Wellington Hurricanes is our local rugby team, and some of the players have unwittingly supplied inspiration for descriptions of Wiki and his fellow Polynesian seafarers. (See the "Wiki Coffin" page on my website.)

Friends love to guess which one might be the model for Wiki himself -- which led to a rather amusing incident. I was passing through the foyer of the Crowne Plaza Hotel during this year's Auckland Reader's and Writer's Book Festival, when I spied the team captain, Rodney So'oialo.

"Rodney!" I hollered, racing up to him. Bless the boy, he stopped and waited with a questioning smile. "My brother thinks you're Wiki Coffin," said I. The smile only slipped a trifle, and broadened when I wished him luck for the game against the Auckland Blues that night. The Hurricanes lost, but never mind. There's a place for them in heaven.
Posted by World of the Written Word at 10:07 AM
Email ThisBlogThis!Share to TwitterShare to FacebookShare to Pinterest