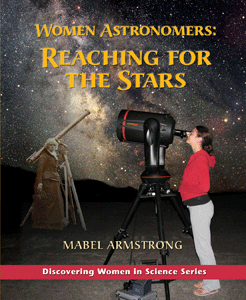 In the harbinger of what promises to be remarkably successful venture, book distributor Beagle Bay of Nevada has just announced that one of their clients, Stone Pine Press, has sold the Russian rights to a young adult book about female scientists.

This is Women Astronomers: Reaching for the Stars, by the rather aptly named Mabel Armstrong. The first in a planned Women in Science series, Women Astronomers describes the fascinating women who strived for the stars, from Hypatia of Alexandria through Maria Mitchell of Nantucket to astronaut Sally Ride.
NEWSFLASH
Women Astronmers has won a silver medal in the Moonbeam Children's Awards. (Scan down to listing 17.)
Posted by World of the Written Word at 10:07 AM
Email ThisBlogThis!Share to TwitterShare to FacebookShare to Pinterest