An inspiring story of sponsorship

Jacqueline Church Simonds, CEO of BeagleBayBooks, the energetic small press that is distributing the latest in Clare Bell's fantasy series, Ratha's Courage (see my earlier post), sent me a few attachments today, saying, "I thought you would be interested in this charming story of how an unrelated hobby became the genesis of a writing career - all from the kindness of SF writer Andre Norton."

Andre Norton, the "Grand Dame" of science fiction, was known for encouraging and helping young writers. One such writer was Clare Bell, author of the Named series. Back in the 1970s, Bell created elaborate creatures out of pipe-cleaners and other materials, which she sold at science fiction conventions and elsewhere.

The creatures came to the attention of Norton,
who ordered a gryphon based on the one in her book, The Crystal Gryphon. 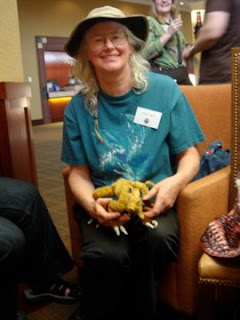 When she sent the gryphon to Norton, Bell slipped in a copy of her recent Star Trek fan-fiction. To her surprise, Norton contacted her and asked if she had written anything original. She had, and she sent Norton a copy of the manuscript. Norton saw promise in it, and sent it to her editor,
Margaret K. McElderry. That manuscript eventually became Ratha's Creature, published in 1983. Ratha's Creature won awards from the International Reading Association and the Pen Center, and was a nominee for the Locus awards.

Bell's creatures are still attracting attention today. They were a hit at the Northern California Independent Booksellers Association (NCIBA) show this past weekend, where Bell was signing copies of her newest
book, Ratha's Courage.

According to the School Library Journal, the "critters" also attracted attention the previous weekend at the second annual Kidlitosphere conference in Portland, Oregon.
Posted by World of the Written Word at 1:49 PM
Email ThisBlogThis!Share to TwitterShare to FacebookShare to Pinterest