New Zealand economist Brian Easton sent me a ripped out page from The Spectator with a review of yet another whaling history, called (yet again) Leviathan.

The last Leviathan I read was a terrific history of American whaling by Eric Jay Dolin (Norton, 2007). This one, it seems, covers the same ground . . . poetically.
Apparently the jacket is the best part of the book.
Quote from Hoare's Leviathan (as quoted in the review):

If any animal were to evolve its own religion, what better animal than one that, for all its trials and tribulations, remains an immortal, omniscient power, a lingering shape in the ocean, beyond all human comprehension and physical dimension, forever spinning into space.

Oh, for heaven's sake. Who does Hoare think he is? The 21st-century heir of the great Herman Melville?
Having decided not to bother reading this book, I flipped over the page from The Spectator . . . and found a really neat piece of poetry. It's so good, I read it out to my husband, Ron, and it is so good that he actually listened.

It's written by Connie Bensley.
She called it, Feeding your cat.
The recalcitrant lock,
the gloomy hall,
the unfamiliar creakings
and sussurations,
the bored letters waiting
to be picked up.
The stink of lilies
drooping in their huge vase
on a ring of unlatched petals.
How suddenly you left for --
where was it? -- Los Angeles? 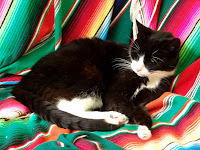 I can't find the cat.
But starlingly, she leaps out
like a trouper from
behind a curtain, tail up,
with an expression I read as:
About bloody time too.

When I bend over her saucer
she bites my hand. It might be
a love bite, and I decide to give her
the benefit of the doubt.
This is real poetry. I will be looking out for Connie Bensley from now on.
And it is evidence that the printed page yields accidental treasures that a simple link via URL does not.
Posted by World of the Written Word at 6:11 PM
Email ThisBlogThis!Share to TwitterShare to FacebookShare to Pinterest