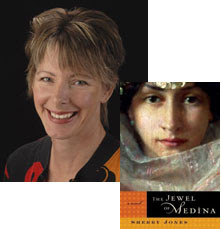 Because the US publication date of Sherry Jones's Jewel Of Medina has been moved up from the original release of October 15, Beaufort Books publisher Eric Kampmann says Jones will stay in the US to promote rather than visit the Frankfurt Book Fair as originally planned.

Well, the early release is the reason given for her non-appearance. Kampmann assured the Bookseller, "This is nothing to do with threats or fear, it is simply because of the acceleration of publication."

The offices of UK publisher Gibson Square remain closed following the firebomb attempt earlier this month.
Posted by World of the Written Word at 11:09 AM
Email ThisBlogThis!Share to TwitterShare to FacebookShare to Pinterest