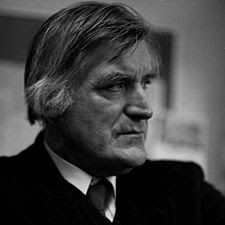 An immense collection of the letters, diaries, drafts of poems, and "innermost thoughts" of Ted Hughes has been purchased by the British Library.

Hughes, poet laureate from 1984 until his death in 1998, is often regarded as the finest English poet of the last century. A man of passionate feelings, his personal relationships were intense. His first wife, the American poet Sylvia Plath, committed suicide at the age of 30, months after he left her for Assia Wevill. Wevill also killed herself months after Hughes left her.

Some of the journals are as mundane as records of fishing trips, while others record his vivid dreams and his interractions with his family. Many are kept on used paper and in secondhand exercise books, betraying that he was a thrifty man, as well.
Posted by World of the Written Word at 2:17 PM
Email ThisBlogThis!Share to TwitterShare to FacebookShare to Pinterest