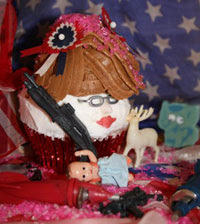 Judy Blume, author of five banned young adult classics, appeared with a stellar line of authors, including Sara Paretsky (didn't know any of her books had been challenged in any way) at the annual Banned Books Read-Out, co-sponsored by the American Library Association and the Chicago Tribune.
Brought forward from its usual timing, the event was unusually well attended, thanks to Republican Vice-Presidential nominee Sarah Palin, whose views on books such as Daddy's Roommate have been the subject of intense speculation.
A lighthearted commentary on this appears on a blog run by The Haphazard Gourmet Girls, which is running a series called "Civilization is Cooked Without Books," featuring recipes devised and devoted to banned books, including Sarah Palin cupcakes. (Illustration pictured.)
Such fun! Read and relish: http://haphazardgourmet.blogspot.com/search/label/2008%20Banned%20Books%20Week
Posted by World of the Written Word at 11:01 AM
Email ThisBlogThis!Share to TwitterShare to FacebookShare to Pinterest