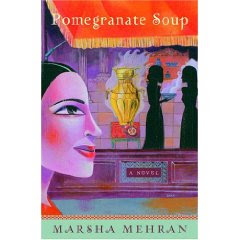 Some time ago, our book club read and discussed Marsha Mehran's Pomegranate Soup, the story of three sisters, refugees from revolution-torn Iran, who set up a little restaurant in a suspicion-torn Irish village, and beguile the citizens with their exotic, delicious food.

We liked the vivid character descriptions, and tried out some of the recipes, starting with lavender-mint tea. We sipped and decided it was rather too sweet, but were intrigued enough to try it again, with a lot less honey. The other meals were winter-hearty stuff, well fitted for Irish villages. I tried out one with meat and beans, and finished up with a cassoulet, which was great.

According to Publisher's Lunch, Mehran has sold the concept for another book, intriguingly called The Margaret Thatcher School of Beauty. Narrated in the tradition of Thousand and One Nights, it is set in pre-revolutionary Iran and present-day Los Angeles. The story follows the lives of four Iranian women and their American-raised daughters, who for years gathered weekly on the carpeted rooftop of "Scheherazade's Beauty Palace" to drink tea and tell stories, and who are now reunited for a three days leading up to a family wedding.

Look for it to be brought out by Putnam (UK).

Posted by World of the Written Word at 9:01 AM
Email ThisBlogThis!Share to TwitterShare to FacebookShare to Pinterest