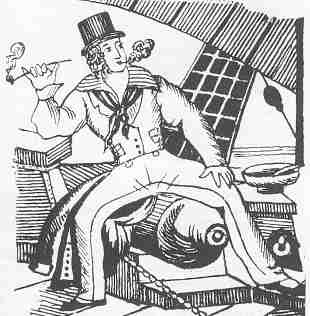 A Lady’s Captivity Among Chinese Pirates by Fanny Loviot was written by a woman who set sail for California in 1855, only to be overtaken and kidnapped by a band of Chinese pirates; the book describes her experience of capture and rescue.
The second book is the 1773 autobiography, The Female Shipwright, by Mary Lacy. Both works are provided with a brief introduction by Margarette Lincoln.
A strange juxtaposition, but both stories are absolutely fascinating. Mary Lacy, at the age of 19, ran away from her nursemaid's job and signed up as the boy servant of the carpenter of the 90-gun ship of the line Sandwich, under the alias, William Chandler. The following year she moved to the guardship Royal Sovereign, then decided to serve an apprenticeship as a shipwright, which she managed despite hard work and awful difficulties, with the help of her multitude of friends (many of whom were girlfriends, with whom she had lighthearted and probably lesbian relationships). I sketched out Mary Lacy's career in my own She Captains, and there is a more detailed study in Suzanne J. Stark's Female Tars.
However, it is an excellent idea to read Mary's strange tale in her very own words.
Posted by World of the Written Word at 10:53 AM
Email ThisBlogThis!Share to TwitterShare to FacebookShare to Pinterest

A great fan of both She Captains and Stark's Female Tars, I'm delighted to hear about The Female Shipwright! Another to add to my ever-growing collection of women at sea in the age of sail stories.

Great to hear from you, Linda. It's nice that there are women out there who are still excited by the amazing stories of enterprising females that lurk in odd corners of maritime history. Talk about blundering into all-male territory! One has to admire their courage and effrontery.

Good luck with your writing.