Sarah Palin to author a book 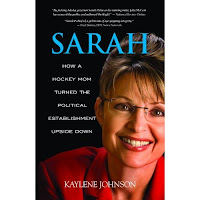 According to the ever-knowing GalleyCat, last week's defeat and resultant backlash might be stinging still, but former Vice-Presidential candidate Sarah Palin can look forward to a sweet book deal. (Though for some reason I thought the book had been written already, by avid fan Kaylene Johnson.)
Page Six avers that Random House is "eager" to talk with her, and an unnamed publishing insider predicted Palin would score a deal with somebody by the end of the month. Because she will have words of her own to say about the campaign?
Linda Mann, the president of Mann Media, who regularly books celebrities for television, was upbeat about this, saying "Her buzz is incredible. She has car-wreck appeal. you're compelled to watch, hoping she'll say the dumbest things possible. I'd propose a show combining her love of fashion and lack of brainpower."
Miaou! -- though I have to agree that Sarah P. has a certain hypnotic pulling power. But one does have to feel sorry for the author who ghosts her book, once the big deal is made. Trying to turn her convoluted sentences into readable prose will be quite a challenge, as for instance her meditations about whether God will call her to the presidency, which hit the headlines today.
"I can't predict what's going to happen a day from now, much less four years from now," she said, according to excerpts released by her friend (and who needs enemies when they have friends like this), Fox News. "You know, I have -- faith is a very big part of my life ... I'm like, OK God, if there is an open door for me somewhere, this is what I always pray, I'm like, don't let me miss the open door ... even if it is cracked up a little bit, maybe I'll plough right on this that and maybe prematurely plough through it, but don't let me miss an open door."

The challenge reminds me of a page-turner I picked up by mistake and couldn't put down -- a book called Ghost by the chronicler of the Roman Empire, Robert Harris, who suddenly abandoned the caesars to do a number on Tony Blair. The mystery was great, but what chiefly intrigued and enthralled me was the main character, who was a ghost writer for written-word-challenged public figures. Until I read it, I had never thought about the immensity and intensity of the tact, diplomacy, and sheer self-control necessary to get the job done.

Boy, do they earn their money.

Posted by World of the Written Word at 6:23 PM
Email ThisBlogThis!Share to TwitterShare to FacebookShare to Pinterest