Service From The Sea– The New Zealand Navy Story 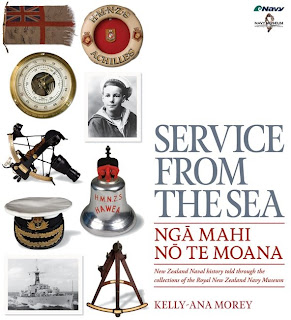 Penguin Group (NZ), with support from the Royal New Zealand Navy and the Naval Museum, has produced a new navy history, Service from the Sea – Ngā Mahi Nō Te Moana” -- and the launch is going to be quite an event, on a uniquely Navy venue.

The Chief of Navy (RNZN), Rear Admiral David Ledson, will host the event on board the Amphibious Sea Support Vessel, HMNZS Canterbury, berthed at the Devonport Naval Base.

The sea and seafarers have been an important and enduring element of the New Zealand story. However, it is often taken for granted that what happens at sea often occurs out of the sight of land Unsurprisingly, therefore, our ‘sea’ history is not as well known among most New Zealanders as the stories of farmland and forest. This book should go a long way to fill that gap.

Rear Admiral David Ledson says, “Service from the Sea tells the Navy’s story and highlights the important role the Royal New Zealand Navy Museum plays in enabling the story to be told. But the Navy Museum is far more than just a backdrop to the story; it provides those essential elements that bring those stories to life, make it interesting and relevant, and illustrate that theNavy is about more than ships – that people lie at the heart of the story.”

Rear Admiral Ledson will sign copies of the book. Quite a change from the normal book launch, where the author does the signing! The end of the event will be memorable, too, with a formal Beat Retreat Ceremonial Sunset, featuring an Armed Guard and the Navy Band, will be performed at 8:00 pm to mark the end of the book launch. The evening gun will be fired from HMNZS Philomel saluting guns, which are situated on The Promenade, Devonport Naval Base.

The Service from the Sea Book Launch will be held on Friday 28 November 2008 from 6:00 pm – 8:00 pm. All media are invited. Is the author, Kelly-Ana Morey, to be invited too, I wonder? It would be interesting to meet the writer of such unusual and strangely gripping novels as Bloom, which I read just a few weeks ago, and think about quite often.
Posted by World of the Written Word at 2:53 PM
Email ThisBlogThis!Share to TwitterShare to FacebookShare to Pinterest