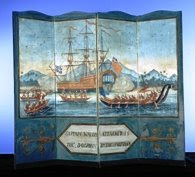 Well, old ships' logbooks can be fascinating, because of the mysteries they hold, as well as the strange events and observations they reveal.
As part of my research into the story of Tupaia, the Polynesian priestly navigator who sailed from Tahiti on the Endeavour with Captain James Cook and rich young botanist Joseph Banks, I'm transcribing the log kept by Captain Samuel Wallis on the Dolphin, June-July 1767, when Tupaia and his fellow Tahitians were enduring (or enjoying) their first encounter with British seamen.

And, in the course of this, I have come across what may be a strange animal. Well, it could be an artifact, but it is included in a list of shipboard livestock. Wrote Wallis on July 8, 1767, "Employed as before. Served Pork & fruit to the ship's company, gave the Old Man a Goose & Gander, a Turkey Cock & Hen & Three Galleances, an Iron Pot many sorts of Garden Seeds & shewd him how to Plant them, sot in different places Plumb, Peach Cherry Apples, Mellon and Pumpkin, Lime, Lemon & Orange Seeds. ―I was taken very ill again ―"

Galleances were new to me -- what are (or were) they? I thought of hens and roosters, but Tahiti had plenty of hen and roosters already. (Wallis called them "fowles.") Then again, he could have been playing with a Latin word. Galliformes, I found, are game birds, terrestrial, grain-eating, and ground-nesting. They include the common fowl -- also pheasants, partridges, grouses (grice?), turkeys, guinea fowl, and peacocks.
Peacocks? I love the idea! However, John Hawkesworth, in his 1773 book about important eighteenth century voyages (An Account of the Voyages Undertaken by the Order of His Present Majesty for Making Discoveries in the Southern Hemisphere), claims that on Friday 14 July 1767, Captain Wallis sent "the queen" of Tahiti (Purea) "two turkies, two geese, three Guinea hens, a cat big with kitten, some china, looking-glasses, glass bottles, shirts, needles, thread, cloth, ribands, peas, some small white kidney beans, called callivances, and about sixteen sorts of garden seeds, and a shovel, besides a considerable quantity of cutlery wares, consisting of knives, scissars, bill-hooks, and other things."
Well, those callivances were new to me, too, but obviously there were lots of those small white kidney beans, while there were only three Guinea hens, exactly the same number as the mysterious galleances -- so could they be one and the same? It's possible, because Hawkesworth took liberties with his material, and it would have sounded a lot more important if the "queen" had been given all those fancy presents, instead of a helpful but ordinary old man -- who probably had to pass them on to Purea, anyway, for she was a chief, and chiefs tended to appropriate such things.
So, having plumped for poultry, I went to the library and looked up books on chooks, and though I found not a single galleance, I learned a lot about guinea fowl. They were called that because they came from Africa. The word "guinea" originally meant "foreign" but was then adapted to mean "African." Fascinatingly, the people of Bristol were very familiar with guinea fowl in the 18th century, because ships came in with flocks of guinea fowl perched in the rigging. 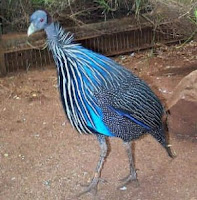 They were exceptional at foraging for themselves in open country, so were presumably a good bet for acclimatisation, too. They were also very good watch dogs (watch birds?), being even better at the job than geese. One book assured me they make excellent pets, being very affectionate -- but I leave that to someone else to prove.
Meantime, the galleances remain a mystery -- which might or might not be solved. Perhaps there are international guinea fowl fanciers out there who know the answer?
Posted by World of the Written Word at 1:48 PM
Email ThisBlogThis!Share to TwitterShare to FacebookShare to Pinterest

Hello Joan,
Sorry I don't know anything about galleances, but I am interested in Wallis's log of the Dolphin voyage. One of my ancestors was John Harrison (not the one of longitude fame) who was the purser on the voyage. I would be interested in any references to him that you find. I had a very quick skim through the log one afternoon at ATL. I have some info available at
http://www.myers.orconhosting.net.nz/harrison.html

Fascinating about Harrison the purser -- he seemed to be the authority for finding longitude, despite the lack of his namesake's chronometer. Wallis's logbook --micro-ms-0353 at the Alex. Turnbull Library -- is strikingly different from both his journal and the version published by Hawkesworth. I'm currently reading an account of the voyage by Newton A. Rowe, "Voyage to the Amorous Islands," but I fear I have to take it with more than a pinch of salt. He jumps to conclusions without letting the reader know the progress of his logic, which is always suspicious. I will follow up your URL with alacrity, and thank you so much. I do assume you have read Robertson's journal at Tahiti? Let me know if you have not, and I will give you the full title etc. Kia ora, Joan

How interesting, Joan. What I looked at was the 2nd draft of his log whereas you are transcribing the first draft. There is an entry for my John Harrison in the Oxford DNB which gives some more information and sources. It describes his navigation as remarkable as "computing these observations was, at that time, an arduous task, involving about four hours of complex mathematical calculation for each determined longitude. As Harrison's was the first voyage of discovery to employ a practicable method of accurately determining longitude at sea, he was able to plot the positions of each of the Dolphin's discoveries in the Pacific with far greater precision than ever before achieved by any maritime explorer. Most significantly, Matavai Bay in Tahiti was located at 149°35' west of London, only six minutes or about 5 miles from the true position. This enabled Cook, also using the lunar distance method but now with the advantage of the Nautical Almanac, to find it again in April 1769."
I do have a copy of Robertson's journal, the Hakluyt Society edition - it's a great read but I don't remember any galleances!

Hi again Cathy, and thank you for your long comment. A book you will be interested in is "Longitude and Empire," by Brain W. Richardson (Toronto: Univ. Brit. Columbia Press, 2005). Page 29 ff. discusses Harrison's use of Maskelyne's ephemeris, which made the determination of longitude from lunar observations possible. What is interesting is that Maskelyne's book wasn't published until after the Dolphin left England, and that Harrison had a pre-publication copy. I wonder how he got it? Maybe he had connections with the Royal Observatory -- maybe he was a friend of the very prickly Dr. Maskelyne!

Hi Dale -- thanks for your learned input! Problem is that there were fowls of the Gallus gallus species on Tahiti already -- carried by the Polynesian settlers as they island-hopped from SE Asia. In fact, Capt. Wallis was bartering for the local "fowles." Today I checked the journal he wrote up from his logbook, and on Friday 24 July 1767 he wrote: "Squally with rain, the latter fair -- Sent the Queen two Turkeys, Two Geese, three Guinea Hens, a Cat big with Kitten, some China, Glass bottles, shirts, needles, thread, cloth ribbon, Pease Calivances and about sixteen sorts of Garden seeds as Cabbages, turnips etc."
As I said before, Calivances were small white kidney beans, and giving only three of those wouldn't make sense, and the three Guinea Hens do seem to equal the three galleances. Wouldn't mind proof, though! It sounds like a Shakespearean word, doesn't it? (The Galleance in French on google is a cosmetic firm, and apparently the name is a play on "Gallic," as in French.) Thanks again, Joan

Hi Joan
Maybe the term "galleance" was merely an affectation. Wasn't it fashionable at the time to write menus in French? When I was in France, I learned that their menus are very descriptive - with first-year university French, I couldn't decipher any of them!

Hi Caron -- good to hear from you. I think you are right. I went through a number of journals kept on the Dolphin, and while there were several mentions of guinea fowl (which fascinated the natives of the Magellan Straits), there were no galleances, or anything that looked like them. No callivances, either. So I think you are right on the mark when you say that Wallis was making up a fancifully Latin-looking word. This was the age of Linnaeus, whose books were very popular -- the 12th edition of Systema Naturae was published the same year the Dolphin sailed on this voyage (or so I find on looking him up), so there would have been a lot of club and salon discussion about the methods of naming and classifying plants and animals. I wish I knew more about Captain Samuel Wallis, as he may have had good friends in the scientific trades. There you go, Caron -- write a biography! Kia ora, Joan

It was extremely interesting for me to read the post. Thank you for it. I like such topics and anything that is connected to them. I definitely want to read more soon.