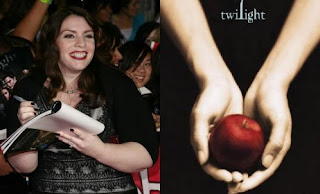 It is quite some time since I first reported the advent of the Stephanie Meyer phenomenon.  At the time I really did mean to read the book that triggered the Bella-and-the-Vampires mania, Twilight, but other things got in the way.  Then I was reminded of it, by a remarkably silly human-interest story in the New York Times about the popularity of Twilight-inspired names, which was repeated by just about every literary blog in sight.  It wasn't even a story with substance, as "Jacob" has been popular for years already, and the others have scarcely moved up the list of babies' names.  Personally, I hope the name of Bella's baby -- Renesmee, for heaven's sake! -- will be used by absolutely no one at all.
The story, plus a cold, plus unusual free time, sent me down to the library and the Young Adults section.  At the counter, a middle-aged patron said rather shyly, "You'll find it's a real page-turner," - so I headed home full of optimisim.  And Twilight surely is a page-turner.  Despite cardboard characters and poorly described settings, the pages flip by.  The secret, of course, is the steamy aura of forbidden sex.  Edward, the unbelievably handsome, marble-faced vampire, has to steel himself to control his urges after falling for human Bella, as seduction would inevitably lead to a blood-drained corpse.
It is an admirable lesson in the virtue of self-control (though I doubt many teenaged readers will pay attention), and also a lesson on how an old genre, for years the virtual property of Harlequin and Mills & Boon, can be given a new twist.  My major quibble is that the "good" ("vegetarian") vampires drink animal blood instead of the human variety. Draining endangered animals like mountain lions and grizzly bears seems improvident in the extreme, when it is so easy to compile a list of human candidates.
I turned to the second book, New Moon.  Edward and his family, horrified when a member comes close to succumbing to his urges after Bella has a blood-spouting accident, withdraw from the scene, leaving Bella (but not this reader) bereft.  After living some months as a zombie, she builds a friendship with a local Indian boy, Jacob (Jake), and -- guess what! -- he turns into a werewolf.  Actually, this is a better story than the first, with the appearance of a good character.  The friendship between Jake and Bella is convincing enough to make the reader care about what is happening to the young man.  Being a teenager in love is hard enough, without growing fur and baying at the moon.

What is interesting is how little editing went into this book.  Did the publishers decide that it would be a waste of time, as it was going to sell squillions anyway?  Awkward sentences, redundancies, and grammatical lapses abound, which was not the case with the first book.  On the bright side, Jake was allowed to develop in most ungenre-like fashion.  An interfering editor could well have made him as wooden as Edward the vampire, to keep to the romantic stereotype.  Instead, I emerged a definite Jacob fan.

I couldn't get hold of the third book, Eclipse, so looked up the synopsis on Wikipedia, and moved on to the last in the series, New Moon.  To put the story in a nutshell, Bella and Edward marry, but she asks that the marriage be consummated before he turns her into a vampire, with the secret wish that she falls pregnant, as once she is a vampire, she will be barren.  Her wish is fulfilled, with unforeseen consequences.  Surprisingly brutally, the teenaged reader is introduced to the complications of an extremely abnormal preganancy and birth, seasoned with the queasy possibility that the child will be a monster.

This is where the lack of developmental editing input became a serious issue, as in my candid opinion, the author was not ready for the challenge.  The whole appeal of the series had been the forbidden nature of sex, but now she had to describe the act in acceptable form, then the horrendous natural consequences, and then Bella's awakening as a vampire after two days of agony, to face not just the psychological challenge of being immortal in the company of other immortals (some of whom are hundreds of years old), but the oncoming revenge of the Italian vampires who had forbidden any such birth, too.  It was as if a Mills & Boon author was suddenly faced with the complexity of literary science fiction, and Meyer is no Anthony Burgess or Brian Aldiss.  Instead of feeling the requisite sympathy for Bella, I was sorry for the author, who seemed so unsupported here.

As it is, Meyer ends up with a Lord of the Rings-style stand-off, "good" vampires and those likeable werewolves on one side of the battlefield, and "bad" vampires slavering for blood and guts on the other.  Various reviewers have pointed out that the result is disappointing -- blood and guts is what was called for, it seems.  Undubitably, a sympathetic editor would have prodded the writer in the right direction for a LOTR battle, designed for the best of Weta workshop ingenuity in the move-production line.  Instead, the author breaks the golden rule of plot development by introducing new characters -- important characters, right at the end! -- who provide a cozy denouement.

Not that I am complaining.  The LOTR battlescenes fixed me for life; the fewer guts and less blood, the better.  An unusual ending is a nice change -- but couldn't someone have helped Stephanie Meyer out, by recommending that the characters could have been introduced very easily near the start of the book?  During the honeymoon, in fact.   It would have been so easy, and the ending so much more satisfying.
Posted by World of the Written Word at 10:54 AM
Email ThisBlogThis!Share to TwitterShare to FacebookShare to Pinterest

Thanks for the reviews, Joan. I haven't got around to reading the series, and to be honest, probably won't bother.

Coincidentally, some writer friends and I had been talking last night about the lack of editing in top seller novels and the whole, who cares about editing, it will make squillions anyway, excuse.

I admire your persistence. I read Twilight and couldn't imagine reading anything else by Ms Meyer ever again. Your willingness to plow through the series is a public service to us all.

Aside from the plodding prose, the endorsement of beautiful but emotionally distant males as objects of desire(and obsession)seemed to be really bad advice to be giving teen-aged girls.

I went a writer's conference over the weekend and heard an editor from one of the publishing houses predict that the next big thing was zombie romances, just as soon as they figured out how to make the brain eating walking dead romantic.

I, too, read the whole series (one as a real book, three on my Kindle), for similar reasons: I needed to find out what it was about these books that had sold 80 million copies (probably millions more by now). I agree entirely with your review and found the final book bizarre and cringe-worthy, especially the idea of a baby in the womb breaking a mother's ribs with its strength from within! I didn't buy it and, frankly, by the time Bella had married her man, I was over it because it wasn't impossible after all. I think the youth reading market was simply ready for another vampire series - Buffy has a lot to answer for. But, more than anything, and putting poor writing and bad editing aside, it's the age-old best-selling story that can never be beaten: Romeo and Juliet. So powerful is this story, that it doesn't matter whether you are Shakespeare or Meyer, it seems - impossible love always sells.