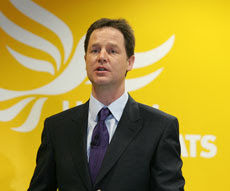 Politicians on the compaign trail are not asked often enough about arts and culture, writes Nick Clegg in The Stage.
According to the numbers, people would rather go to museums, art galleries, stage shows, and concerts, than line up at the ballot box -- or so goes his argument, which is nicely calculated to appeal to a town hall-style audience.  The creative sector is predicted to emply 1.3 million people by 2013, he says -- more than the financial industry.  Why confine the country's fortunes to one square mile of London, when a hundred thousand square miles of British countryside hold such artistic and creative promise?
"Now is the moment to harness the potential in that burgeoning creative industry!" he cries.

Amen to that.  One banker's bonus could provide art classes, drama classes, and writing classes in a whole slew of schools, with a potentially much greater boost to the economy.  Right now, thousands are descending on Wall Street protesting about greed and obstructionism -- and, what's more, the spelling on the signs is right!  I hope those financial wizards who think of the "market" as a faceless object, not a mass of people with families, mortgages, and jobs, are watching and taking note.
Posted by World of the Written Word at 9:15 AM
Email ThisBlogThis!Share to TwitterShare to FacebookShare to Pinterest